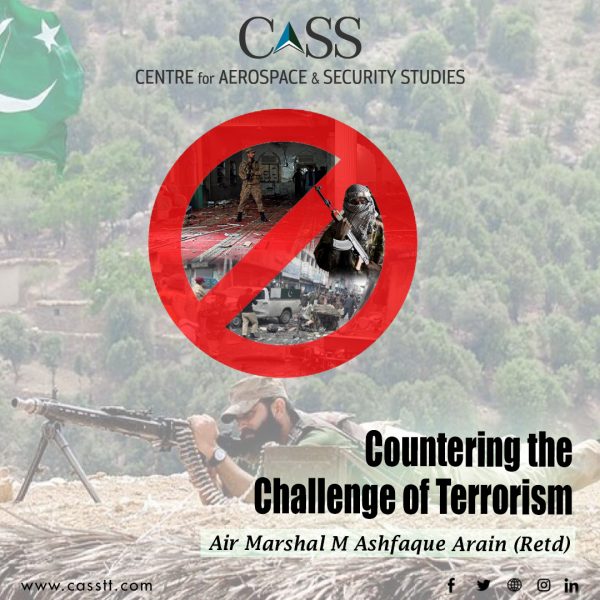 The end of year 2022 has seen an upsurge in the number of acts of terrorism in the Pakistan. While there was a gradual increase for some months, the number dramatically increased in the recent past and with ever increasing ferocity.  Terrorism is a serious threat to life and property as well as to rule of law in the country with adverse impact on daily life, economic activity and peace in society.  Two meetings of the National Security Committee discussed in detail the course of action to be adopted to counter this rising wave of terrorism.

Since terrorism does not recognise borders, many countries have joined hands to counter this threat. NATO, the biggest military alliance has its own counterterrorism policy guidelines. These guidelines focus on three main areas including awareness, capabilities and engagement and the efforts against terrorism include deterrence and defence, crisis prevention and management, and cooperative security.

Counterterrorism efforts whether in one state or among a group of states needs to be countered through prevention and suppression by effectively employing all possible means available to the state(s). This requires clarity of purpose, clear definition of responsibilities, close coordination between all the stakeholders and continuous review of the threat, effectiveness of the actions taken and results achieved to assess the efficacy of those efforts. On the contrary, poor implementation of plans and unrealistic measures prove counterproductive.

It needs to be understood that while enforcement of the writ of the state through counterterrorism (CT) operations is essential and justified, measures should never be provocative or extrajudicial. Making life difficult for citizens and creating an atmosphere of fear and suppression will result in exactly the opposite of the intended efforts; which include rule of law and safety and security of the citizenry.

A good example could be of Council of Europe which for over 40 years, has ‘helped to develop and reinforce key legal standards to prevent and suppress acts of terrorism.  Its comprehensive approach focuses on fighting terrorism more effectively by strengthening and improving national legislation, as well as facilitating international co-operation. However, it emphasizes full respect for human rights and the rule of law while endeavoring to bringing terrorists to justice.’

Pakistan has the experience and expertise of successfully controlling terrorism in the country in the past. This was accomplished with huge sacrifices by the personnel of Law Enforcement Agencies (LEAs), well-planned and effectively executed operations with complete public support.  Every organ of the state had played its role for elimination of this menace. This new wave also needs to be handled with good planning, coordination among various elements and LEAs alongside full public support.

While these operations would require detailed plans, it must be remembered that instead of being reactive, a successful fight would necessarily require a proactive approach. This would help in wresting initiative from the miscreants and putting them on the defensive.

The starting point should be a coordinated effort by all the intelligence agencies and LEAs to share already available information and focus on fresh intelligence gathering.  All the agencies must also optimally utilise their respective expertise to intercept terrorist communications through the Internet, mobile phones and satellite phones.  This should be supported by human intelligence. Successful execution of this phase would make it easy to track and hunt down the terrorists, their supporters and financiers.

Intelligence requires putting together small and trivial pieces of information to develop/formulate a clear picture.  It, therefore, necessitates devising a methodology for information sharing between various intelligence agencies and LEAs.  Since organisational rivalries at times deter information sharing, steps must be taken for timely sharing of information and acknowledging contributions. The intelligence information should also be utilised to block movement of weapons, explosive materials and financing.  Effective border monitoring and coordination with neighbouring countries, especially Afghanistan, will enhance effectiveness of these efforts.

The safe city systems installed in all major cities must be closely monitored and optimally utilised to track suspicious movements. Additionally, identity of all the inhabitants of rented accommodation, especially in the recent past must be verified.   Public must be educated and their support should be sought.  They should be encouraged to report unusual activities. The procedure should be easy as well as cognizant of protecting the identity of the individuals. Steps creating discomfort for the public must be avoided.

Trained manpower is necessary to monitor various systems, coordinate activities within and outside the departments and to sift intelligence information, reinforcing the need for right person for the right job. Similarly, police personnel deployed on unnecessary protocol duties should also be utilised for their primary role.

Bringing an end to terrorist acts is not a choice but compulsion. Pakistan in the past has won this war and it can do so again using its experience and expertise.  However, this war cannot be won without public support, collective utilisation of all the intelligence agencies and LEAs.  All these would require honesty of purpose, internal cohesion and focused approach.  Any attempts to use it for blame game, for political point scoring or shying away from other national priorities will only be harmful.

The author is a retired Air Marshal of the PAF who served as Pakistan’s Air Adviser at New Delhi from 2002-2006, presently working as Advisor to CAS on CASS Affairs, and Director Emerging Technologies and International Coordination at Centre for Aerospace & Security Studies, (CASS), Islamabad, Pakistan. The article was first published in The Nation. He can be reached at advtocas@casstt.com