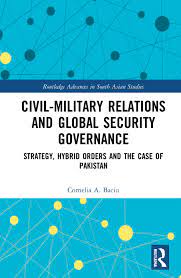 Civil-Military Relations and Global Security Governance: Strategy, Hybrid Orders, and the case of Pakistan is authored by Cornelia Baciu who is serving in the capacity of researcher at the Department of Political Science, University of Copenhagen. This book was finalised during her DAAD Postdoctoral scholarship at Paul H. Nitze School of Advanced International Studies (SAIS), Johns Hopkins University, USA.

As the title elaborates, the book is about the nature of civil-military relations in hybrid governance regimes and the role of non-state actors and Civil Society Organisations (CSOs) in diffusing democratic norms and fostering reforms at the institutional level. Baciu identifies the reasons of civil-military rift in hybrid orders and tries to address these gaps using the Middle Range Theory. The key elements of the theory as identified in the book include endogenous military change, transformation of military roles, informality, institutionalism, checking power and transparency and, role of non-state actors in building power and will for change. This theory serves as an enabler of civil-military relations while keeping in view the policy and security dynamics.

The central theme of the book dictates that complementarity is the best option to strengthen civil-military relations in hybrid orders. This approach can help both civil and military institutions in setting aside their differences on important matters pertaining to national well-being. The participation of all important stakeholders results in decreasing the level of information asymmetry by facilitating the estimation of each participant’s policy position. In her book, she also focuses on strengthening mechanisms of democratic control. For this, she proposes the idea of building institutional resilience and robust institutional mechanisms. However, keeping in view the institutional and security settings in hybrid orders, she has also propagated a mixed application of hard and soft power.

Baciu outlines a number of elements that can kick start the process of democratisation as well as covered their limitations which adds credibility to her argument. She drives home the importance of strategy, foreign funding, role of political parties and media as enablers of civil- military relations. According to her, leadership both at the civil and military level, can also play a positive role in building civil-military relations. However, in case of Pakistan, the aforementioned elements have not been fruitful in ensuring meaningful democracy due to changing internal and external security dynamics. This implies that the process of democratisation can be overshadowed by the slightest slight change/shift in internal or external security. A military institution can, then, exploit the uncertainty in the security situation as a trump card to strengthen their foothold in decision-making. In this regard, the author highlights two utmost challenges faced by hybrid states. Firstly, establishing a neutral base for conduct of civil-military relations; and secondly, exercising their constitutional power for holding the military accountable. To address these challenges, Baciu puts forth a number of recommendations. These recommendations include adoption of pluralistic policy models based on institutional cooperation, multilateral decision-making, inclusiveness, interdependence, dissolving institutional boundaries, stimulating the emergence of shared interests and values, role of think tanks in terms of offering informed policy advice to the government and shifting the traditional security debate to human security. Moreover, she points out that there is a growing recognition within Pakistan’s military circle that use of hard power is not reliable in the long run and they really need to use soft measures, especially in terrorism hit areas. Soft measures in this regard can include involvement of CSOs to conduct development projects and human security projects in such areas. This not only helps in softening the image of the military but may also help in establishing a sense of ownership among all stakeholders.

At the same time, the author also shares events that highlight the existence on non-democratic and even autocratic tendencies in the Pakistan military. Such deep-rooted tendencies make the process of democratic transition non-liner, asymmetric and incomplete.

The book has a balanced approach towards explaining the nature of civil-military relations in Pakistan. However, at certain places, the author uses inappropriate terms for the state and its institutions. As a reader, I believe that this inappropriate use of language undermines both the reputation and sanctity of the state and its institutions and may further add to institutional friction as well as the author’s credibility as an objective scholar.  Another problem with the book is that it tries to establish the importance of strategy but fails to pen down an effective strategy of engagement amongst the relevant stakeholders in terms of the decision-making process. Despite her main hypothesis i.e., of oversight mechanisms for the military, she focuses more on the process of institutional change and ways to develop a neutral base for civil-military relations.

The proposed model in the book can enable both civil and military institutes in identifying and deterring malign influence and hybrid threats. Pakistan’s military has equally recognised that the use of hard power is not effective in the long run and that they really need to include certain soft measures in their counterterrorism institutional mechanisms.

While Baciu has successfully identified some gaps such as institutional weaknesses and challenges of foreign funding that need to be bridged to ensure peaceful transition to democracy, it must be kept in mind that transition to democracy in hybrid orders is not a smooth process as there are certain contributory elements (e.g.,  political, economics, illiteracy, religious extremists, etc.) that will be acting counter to the implementation of democratic norms. Identification of loopholes in this transition process can also provide space to non-state actors to derail the process of democracy.

This book can be useful both for students and professionals who are interested in understanding the foundations of civil-military relations in hybrid orders. It can be equally useful for domestic and international organisations, who are working on promoting internal democratic norms and culture. It can be a good addition in the think tanks comity and for the media to enable them to understand and adhere to their role in the democratisation of policy-making processes.

Amna Tauhidi is a Researcher at the Centre for Aerospace & Security Studies (CASS), Islamabad, Pakistan.