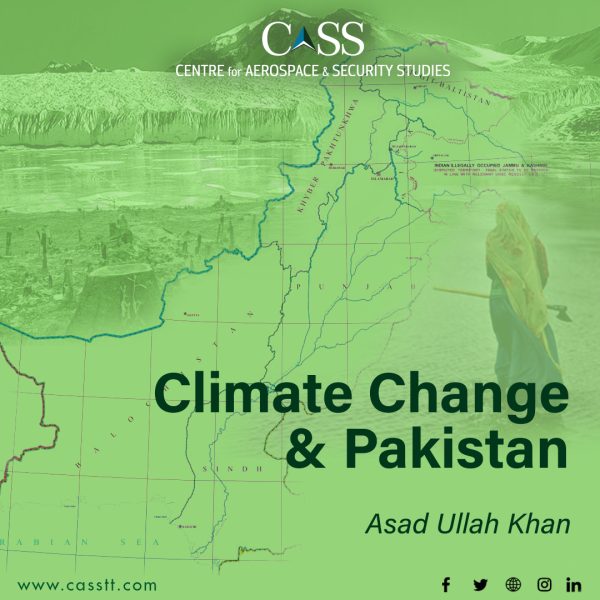 The current wave of climate change is affecting the globe with severe repercussions in the form of disastrous calamities. From droughts to wildfires to intense floods, the Earth is witnessing climate-induced disasters at an alarming rate. The climate crisis around the world has highlighted the ecological vulnerabilities that are further compounded by human actions and lack of preparation. Pakistan is one of the countries that is most vulnerable to climate change and its catastrophic impacts. In fact, we contribute less than one percent to global warming.

The Global Climate Risk Index of 2021 has put Pakistan among top ten countries that are most vulnerable to climate change. In less than 20 years – from 2000 to 2019 – Pakistan faced 173 extreme weather events with estimated economic loss to be of USD3.8 billion. This includes the massive loss of life and livelihoods during the catastrophic floods in 2010. The frequency and intensity of these crises is exponentially increasing with every passing day. Erratic rainfall, water scarcity, melting of glaciers and increasing temperatures show that Pakistan is inevitably facing the brunt of a climate catastrophe.

Today, massive floods triggered by heavy rainfall have wreaked havoc in the entire country. Over the past two months, the country has witnessed abrupt rainfalls, followed by massive floods during the monsoon season. More than 33 million people have been affected by the deadly floods, causing huge economic loss, internal displacement and food insecurity. Over 115 districts in the country have been hit by the calamity with a total financial loss amounting to USD 20 billion. The death toll due to floods has reached 1600, coupled with the death of livestock and heavy damage to infrastructure.

On visiting the flood-hit areas in the country, United Nations General Secretary António Guterres termed the devastation ‘climate carnage’ that requires a ‘massive and global response’. Advocating debt relief for developing and poor countries like Pakistan, the UN Chief called for International Financial Institutions (IFIs) to initiate debt swaps that could enable countries to invest in climate resilience and sustainable infrastructure, instead of being burdened with debt payments. Considering the small carbon footprint that Pakistan has, the country is demanding climate justice – the rich, industrialised countries to pay for their massive carbon emissions so that reconstruction and rehabilitation efforts in Pakistan could be made.

Many activists, scholars and environmentalists are even calling for reparations for the damage. In the backdrop of the loss and damage incurred by the country, the demand for global climate justice is not unfounded. However, the magnitude of the calamity worsened due to the unprepared response (or lack of it) in the face of the inevitable crisis looming over the country for years. Proactive response, prompt action against the disaster, and country’s resilience against climate change are also questionable.

Years of weak ecological governance have exacerbated the country’s vulnerability to the catastrophic impact of recent floods. One loophole is the quality of water infrastructure: the limited capacity to resist large increase in the flow of rivers has raised serious questions about the country’s water governance. Poor systems of drainage and lack of planning for construction in flood-prone regions have exacerbated the problems of water management. Lack of proactive policy planning to constrain deforestation, limit carbon emissions and bolster disaster management has impacted mitigation efforts. Governments – at provincial and local levels – lack intent and at times capacity to combat illegal construction and manage water resources efficiently.

Continuous political instability, coupled by the little focus on human security, has deflected policy attention from sustainable housing, water provision and preparedness against ecological disasters. Effective management of rivers and other water sources at a regional level is also compounded by the lack of intergovernmental cooperation on water between Pakistan and India. Both countries have not able to design and implement strong protocols to preserve water bodies, manage these resources prudently and initiate policy protocols for joint infrastructure water projects.

Beside internal solutions and mitigation, the causes of massive floods and their catastrophic impacts have shown that climate-induced natural disasters also require global attention. Climate justice for rehabilitation and reconstruction through debt relief and reparations should be the normative goal. World leaders must come together to mitigate the disproportionate burden that the country is facing due to this climate emergency. However, more informed and urgent policy changes need to be initiated at home. The sustainability agenda for environment should top the list of policy priorities for conserving the environment, regulating water bodies and their flow, and limiting the dependence on fossil fuels. Lastly, the government should make efforts to promote sustainable and climate-friendly infrastructure, promote ecological awareness to save water, plant trees and reduce the output of unhygienic waste and pollutants.

Asad Ullah Khan is a Senior Researcher at the Centre for Aerospace & Security Studies (CASS), Islamabad, Pakistan. He can be reached at cass.thinkers@gmail.com