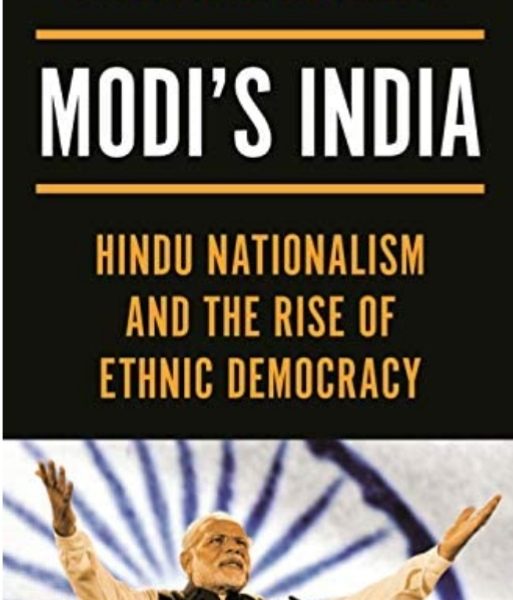 In this English iteration of L’Inde de Modi: National-populisme et démocratie ethnique, Christophe Jaffrelot explains the political journey of Narendra Modi. In a very engaging style, he elucidates how Modi rose to power and transformed the fabric of Indian democracy and society.

The book comprises three parts. In the first part, the author explains the advent of the ‘Hindutva’ ideology, penetration of Rashtriya Swayamsevak Sangh (RSS) into Indian politics, and narrates the various phases of Modi’s political journey which began as a young ardent RSS follower. In the second part, the book discusses Modi’s role as the Prime Minister of India. The author highlights the manner in which Prime Minister Modi normalised Hindu supremacy, implemented RSS ideology  and gradually turned India into an ‘ethnic democracy’ from a ‘secular’ one. In the last section, the author sheds light on the transformation of India into an authoritarian state where the exclusion of minorities has been institutionalised into society, the judicial system, electoral process and state jurisdiction. Jaffrelot concludes that Prime Minister Modi has introduced a new dimension to Indian politics – the creation of a de facto Hindu state.

The author presents an objective, well-structured analysis of Prime Minister Modi’s role in Indian politics, and comprehensively explains his points with concrete and elaborate evidence to strengthen his arguments. The chronological order and the manner in which the author narrates different events makes it very easy for the reader to comprehend and link various events. The life events, decision-making approach and leadership styles of Narendra Modi are covered in minute detail.

The book also helps in understanding the role of leadership in shaping societies. Jaffrelot explains the importance of leadership and posits that a single person can mold the societies according to his own perceptions if he knows how to appeal to the masses. Narendra Modi engaged all strata of Indian society by utilising all available resources to market his vision of how India should be. We can see his political journey as a young RSS activist pressurising NGOs, trolling journalists, using social media campaigns, whipping up anti-Pakistan narrative and exploiting state machinery as the Prime Minister. During his journey, Modi adapted very well to the evolving political demands at every step which enabled him to rise to the pinnacle of his political career. Jaffrelot also evaluates the economic performance of Prime Minister Modi in Chapter 4 through facts and data analysis. He concludes that promises of economic prosperity made by the Indian Prime Minister were neither implemented nor were the claimed economic goals met.

There are important lessons for leadership aspirants as well. The techniques applied by Narendra Modi to conquer the hearts and minds of his followers are well explained. According to Jaffrelot, it is imperative for leaders to adapt to changing times and develop a cohesive strategy in which their  style of communication style appeals to all segments of society. Narendra Modi not only focused on traditional ways of reaching out, he also invested substantially in modern technology such as the social media. The author refers to the WhatsApp strategy of Bharatiya Janata Party (BJP) in the 2019 election campaign which involved 200,00-300,000 groups to spread his narrative (p.327).

In terms of policymaking, this book will help other world leaders to familiarise themselves with the danger Narendra Modi is posing to India and the region. It will enable them to understand how important it is to take notice of his dangerous ambitions.

Although the book does justice to the subject, some discrepancies were observed, e.g., while explaining the aerial encounter between India and Pakistan on 27th February, 2019, the writer mentions that Pakistan shot one Indian aircraft (p. 313). In reality, two Indian aircraft were shot by the Pakistan Air Force which included one MiG 21 and Su-30 MKI. On the same page, in contrast to reality, he blames a Pakistan-based group for the Pulwama attack on 15th February where a suicide attack was carried out on a convoy of Indian Armed Forces. The connection drawn with Pakistan by the Indian government was merely for political objectives and lacked any concrete evidence. The fact remains that a young boy named Adil Ahmad Dar hailing from Indian Illegally Occupied Jammu & Kashmir (IIOJ&K) was involved in the attack. The motivation for Adil to attack the convoy/check-post was the continuous state torture on the Kashmiri population.

As a Pakistani reader, I feel that the anti-Pakistan rhetoric and hybrid warfare aspects should have been discussed in more depth as this has played a massive role in Narendra Modi’s politics.

The book helps ones understand the ideology of RSS and how this cult of zealots is being used by Modi for his political objectives. It is equally helpful in seeing the evolution of Indian politics under his rule and how India is turning into an authoritarian state under the radicalisation campaign launched by the sitting Indian Prime Minister.