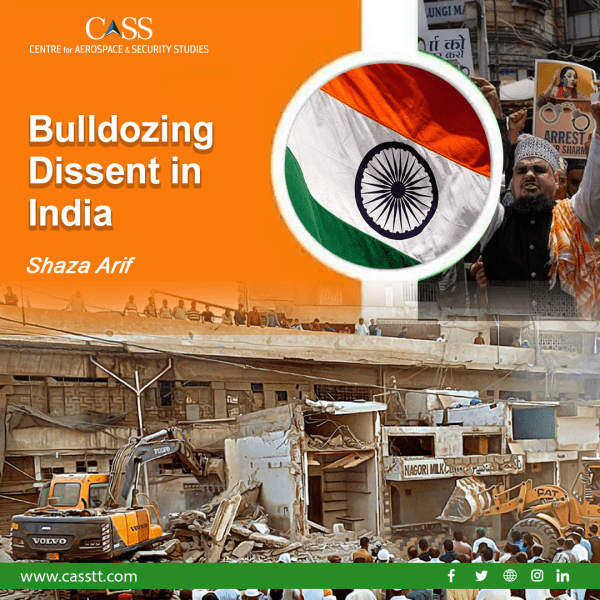 State brutality and hostility have emerged as the defining factors in BJP’s (Bharatiya Janata Party)  policy toward Indian Muslims. From mob lynching and punishment on beef consumption to imposing a ban on the ‘hijab’ in universities, BJP continues to find novel ways and means to target Muslim society and enforce the concept of Hindu supremacy in India. While deliberate marginalisation of Indian Muslims is not new and remains an important part of India’s policy towards its minorities, the intensity of this campaign is soaring with every passing day.

Recently, two senior BJP members made disparaging remarks against the Holy Prophet Muhammad (PBUH), brushing aside the sentiments of the state’s largest minority. The comments drew criticism from around the world, creating a diplomatic row for India.While PM Modi decided to remain silent on the issue, the concerned BJP members had to be suspended from the party given the intense backlash from several countries, especially the Gulf states.

On the other hand, the remarks also sparked a wave of anger in the Indian Muslim communities, who registered their grievances by holding protests on the streets in various parts of the state.  However, to deal with its own citizens, India resorted to using force and refused to let the Muslims protest peacefully, depriving them of their fundamental democratic rights. Amidst the demonstrations after Friday prayers, clashes between protesters and police broke out in several parts, the most notable one occurred in Uttar Pradesh (UP). Two teenagers lost their lives, and several were injured. The Indian police also arrested approximately 300 individuals taking part in the protests.

The most concerning event that followed afterwards was bulldozing the houses of Muslim activists who were either present at the demonstrations or were apparently the organisers. The demolitions were justified on the pretext that they were illegal establishments. In reality, these criminal activities were done on the behest of the Chief Minister of UP, Yogi Adityanath, who is an ardent RSS (Rashtriya Swayamsevak Sangh) follower – the most projected political figure in BJP (after Narendra Modi) and a torchbearer of Hindutva politics.

It has been observed that the frequency of the use of bulldozers to demolish personal property is increasing in Muslim-majority areas in India. CM Adityanath himself is considered the pioneer and advocate of this ‘bulldozer strategy’, which is now frequently being executed throughout India by other BJP leaders. His ardency with the idea of demolishing Muslim houses can be sensed from the fact that bulldozers are displayed at BJP rallies to demonstrate them as a symbol of state power. Mrityunjay Kumar,  Adityanath’s media advisor later tweeted a photo of a bulldozer with the caption, ‘Remember, every Friday is followed by a Saturday,’ which conveys the government’s unapologetic stance on its actions and the intent to use such equipment without hesitation.

Whats worse, the state machinery deliberately orchestrates the scenes of Muslim houses being turned to rubble to instil a fearful impact. Its purpose is to deter the Muslim communities from protesting against the ‘saffronized’ state. Such images are meant to signal that the state will not tolerate such kind of opposition in the BJP-led India and will not hesitate to exercise the use of force against such segments. The prime objective is to bulldoze their courage to stand against oppression in the future.

Another way to look at this violence is the long-term dynamics of Indian politics. While it is apparent that Narendra Modi will contest the next Indian elections for BJP, it is fairly evident that an alternative leadership is preparing to succeed him in the future. The potential candidates are replicating his past machinations to strengthen their personal and political statures. Akin to Modi’s Gujarat massacre, his party members are recreating events that can bear similar impacts in order to emerge as radical leaders in accordance with BJP’s vision.  This includes intense and targeted verbal and physical attacks on Muslims. Hence, the use of force against Muslims will likely be a prominent factor for capitalising on the majoritarian Hindu vote bank.

Lack of accountability, persistent silence of key leadership and the embedded political objectives are fanning dangerous flames in an already fraught environment for Muslims in India. The repressive attitude toward Indian Muslims has now been institutionalised at the state level and suggests that life will only worsen for them. India’s belligerent policy and confrontational actions will fuel further divisions in a society that has become extremely polarised along religious lines. Political interests are overshadowing national interests and the trend is likely to continue.

Shaza Arif is a Researcher at the Centre for Aerospace & Security Studies (CASS), Islamabad, Pakistan. The article was first published in Modern Diplomacy. She can be reached at cass.thinkers@gmail.com.