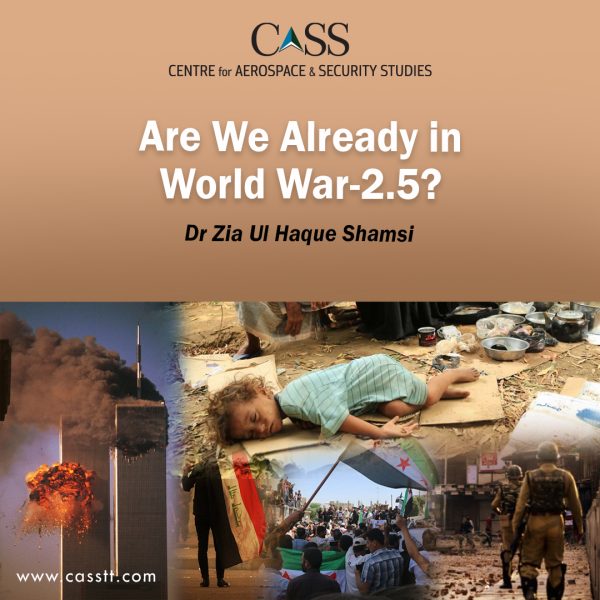 This century is only 22 years old, and we have already seen a number of major wars and limited conflicts. Unfortunately, the century began with the tragic events of 9/11, which were followed by an even more terrible overreaction that lasted for two decades. South Asian rivals, India and Pakistan, were at each other’s throats in one of the longest and extremely tense face-offs. Iraq was destroyed for no reason except to complete the unfinished agenda of eliminating its leader Saddam Hussein and once it was done, the invading forces quietly left the country in rubble to be cleared by a hand-picked government.

Syria and Libya have been pushed back by decades, and perhaps would never be the same. Kashmir and Palestine are losing hope due to lacklustre interest by international institutions and stakeholders in the resolution of disputes. The war in Yemen has entered its eighth year with hunger, poverty, famine, and chaos.

QUAD (Strategic Dialogue between the United States (US), Australia, Japan and India) has added fuel to the fire in the Asia-Pacific. BECA (Basic Exchange and Cooperation Agreement) has given India an edge over Pakistan in the domain of strategic communication, intelligence, and surveillance with access to real-time targeting information in any future conflict between South Asian rivals.

The world is moving fast from unilateralism to multilateralism due to the rise of China and the resurgence of Russia. The US is unwilling to accept these ground realities for obvious reasons, and perhaps overplaying itself in the Asia-Pacific to counter China through QUAD and AUKUS. The US assurances about Taiwan’s security in case of a Chinese action also appear to be an overstatement. However, its overt and outright support for Ukraine against Russia cannot be ignored.

President Biden stated, “his Russian counterpart Vladimir Putin’s veiled threat of using tactical nuclear weapons against Ukraine marked the first prospect of nuclear ‘Armageddon’ since the Cuban missile crisis.” However, the US Administration found that there was no evidence for this claim.

Likewise, Biden’s statement about Pakistan that it “may be the most dangerous nations in the world as country has nuclear weapons without any cohesion,” comes at a time when Pakistan has been trying to reset its relations with Washington under a relatively new administration. Moreover, Pakistan is one country in the region that has stood by the US in all of its security adventures and misadventures from the early 1950s to the early 2020s. Pakistan paid a heavy price for its participation in the US wars in Afghanistan with over 85,000 lives and a loss of nearly USD 150 billion to its economy during the period of violent engagements. Yet, high-ranking US officials, like Nikki Haley have been professing, “The US should not give aid to Pakistan until it stops harbouring terrorists.”

I am of the opinion that the evolving world order is already amid World War-2.5 because nearly half of the world’s population is affected due to ongoing wars and conflicts around the globe, either directly or indirectly. Moreover, no nation at this point in time, no matter how militarily or economically strong, has a silver bullet to achieve a certain kill. Perhaps, this is one of the reasons why ongoing conflicts and wars are protracted and there is no outright victor at the end. For instance, in Afghanistan, the war lasted over two decades between the world’s most advanced, professional, and best-equipped armed forces in the history of warfare and a disorganised non-state militia. The outcome is part of one of the darkest chapters of the US war history.

Likewise, the war in Yemen between an alliance of some GCC countries against a resistance group is an unnecessary war that has led to an extremely precarious humanitarian crisis in the region.

The Russia-Ukraine war has entered its ninth month, with an expanded scope of kinetic and non-kinetic means that includes massive bombings against vital installations and critical infrastructure, the annexation of four eastern regions by Russia, scores of fatalities, and the displacement of thousands of residents from the conflict-ridden areas. The food and energy crisis due to supply chain disruptions and rising inflation due to continued violence is a by-product of this war in the heartland of Europe. While these analyses may be worth discussing to draw pertinent lessons, the big question remains: can we avert World War 2.5 from becoming World War 3? Perhaps, the time is running out and instead of suggesting that the situation is similar to that of the Cuban Missile Crisis of 1962, it is essential to find a Kennedy and Khrushchev in the system to defuse tensions and end the war without any further delay.

The writer is the author of the book ‘Nuclear Deterrence and Conflict Management between India and Pakistan’. He is presently working as the Director (Peace and Conflict Studies) at the Centre for Aerospace & Security Studies (CASS), Islamabad, Pakistan. The article was first published in Daily Times.

According to a study, the average human being spends around 90,000 hours of life at work. Hence, it is important to understand how the work
176 views