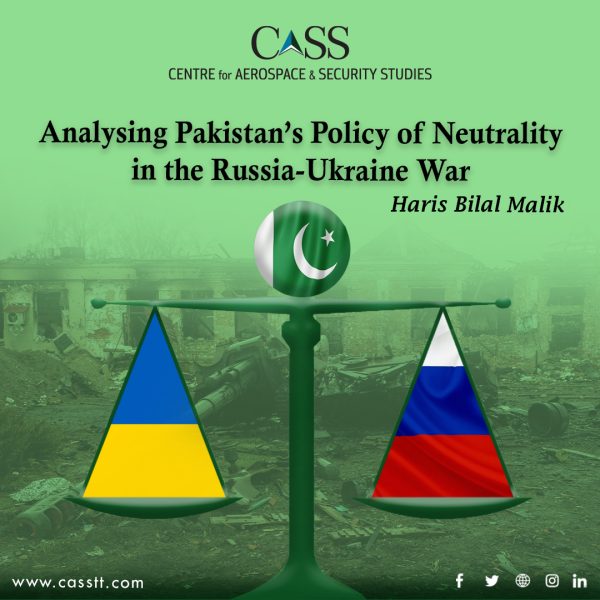 Every region in the world has been affected by the ongoing Russia-Ukraine war in one way or the other, whether it is Europe for its dependence on Russian gas or countries around the world that import Ukrainian food products. Apart from these, at the diplomatic level, given the United States’ influence and dominance in the international arena, all countries have to choose between siding with the West or staying neutral – opposition seemingly not being an option. Owing to the exceptional influence that the US and West enjoy, even neutrality has challenges of its own. For Pakistan, the situation has been especially precarious against the backdrop of its long history of relations with the US and the EU, which are major stakeholders in the Russia-Ukraine war. This article aims to analyse the factors, specifically in the geostrategic and geoeconomic domains that are important for Pakistan to stay neutral.

In the initial days of the Russia-Ukraine conflict, the issue emerged as an important foreign policy agenda for Pakistan since the former Prime Minister was coincidentally in Russia when the war broke out. The coincidence resulted in wider discourse and speculations. Despite this, Pakistan’s position since the start of the war has been ‘not to take sides’. It has managed to pursue a balanced and neutral policy vis-à-vis the Russia-Ukraine war till now. There could be many arguments against this approach. A leading argument could be that when Russia is reluctant to come closer to Pakistan, then why not support the US and oppose the Russian actions in Ukraine?

However, Pakistan needs to continue her policy of neutrality. Pakistan has good relations with Ukraine in various domains. In the economic domain, their bilateral trade, as of 2021 stood at USD 411.184 million. Both countries also have military-to-military relations. According to the Stockholm International Peace Research Institute (SIPRI), Pakistan is among the biggest arms market for Ukraine with USD 1.6 billion in contracts being completed till 2020. Over 3500 Pakistani students were studying in Ukraine, who were repatriated after the war broke out in Ukraine. Both countries have also been cooperating in science and technology. Due to this, rather than become a party in the war and make another enemy or at least lose a friend; it would not be beneficial to take any side.

In the same vein, Pakistan and Russia, while moving on from their history of the Cold War, have gradually enhanced their bilateral relations in economic and military domains. As of 2020, their bilateral trade was USD 790 million. Both countries have also talked about enhancing their industrial and energy cooperation. They have also agreed on the ‘Pakistan Stream Gas Pipeline’, an 1100 kilometres gas pipeline project that will carry 12.4 billion cubic feet of natural gas annually. In the military domain, their collaboration has enhanced in recent years. Pakistan acquired Mi-35 helicopters from Russia. Whereas, joint military exercises have been conducted in both countries on regular basis. Even though Pakistan wants to enhance its relations with Russia, it should not be at the cost of compromising its relations with any other country.

History has taught us that there has always been a huge cost that Pakistan had to pay when it was not neutral. For instance, during the Cold War, Pakistan had remained indulged in bloc politics for decades in the pursuit of its geostrategic interests. However, this did not result in any fruitful outcome in the longer term. Similarly, in the post-9/11 era, Pakistan supported the US as a front-line state in the Global War on Terror (GWOT) in pursuit of a peaceful and stable world. Yet, the cost, both in human and economic terms, it had to pay has been enormous. It suffered the loss of 83,000 lives and an economic loss of over USD 150 billion. Moreover, despite this support and sacrifices, there has been consistent lack of trust and changing US priorities towards Pakistan. In fact, India has now emerged as an important partner for the US and a more relevant stakeholder in regional affairs. This obviously has implications for Pakistan since despite paying huge costs, it remains at the losing end.

Taking sides in the past has not resulted in any substantive and sustainable economic gain either. For instance, Pakistan-US bilateral trade, as of 2021, was USD 8.81 billion, with the US being Islamabad’s largest export market, however, the trade volume is not sufficient to balance the high import bills.

So, the bottom line is that the Russia-Ukraine War is a new theatre of international security and great power politics. The conflict is in Europe, Russia is a major power, and it is for the regional and relevant international players, who have stakes in Europe, to decide its fate. There is no point in Pakistan becoming a part of someone else’s war and indulging in bloc politics once again. History has shown that the country has been at the losing end when it actively engaged in contestation between two superpowers – it needs to draw relevant lessons. Though challenging, Pakistan needs to continue its policy of neutrality in the ongoing Russia-Ukraine War in its own national interest.

Haris Bilal Malik is a Research Assistant at the Centre for Aerospace & Security Studies (CASS) in Islamabad, Pakistan. He can be reached at cass.thinkers@casstt.com