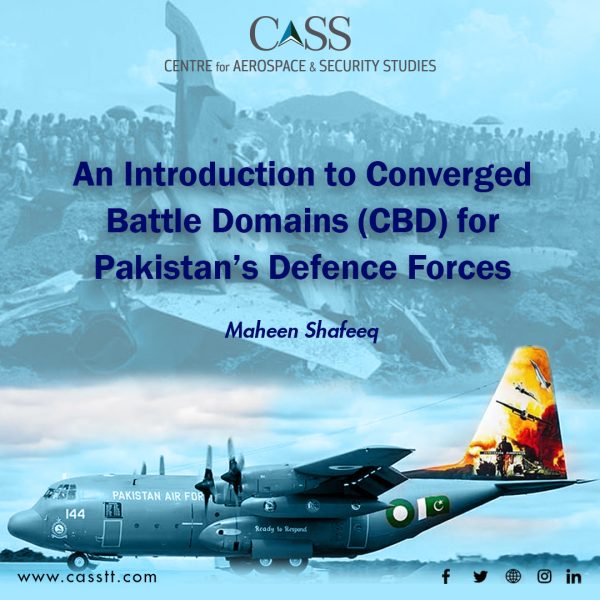 Pakistan’s Defence Forces have matured in terms of warfighting potential and integrating its physical strength with advanced war-fighting tools. It has shown an agile strength against a numerically superior force in the present century on 27th February 2019 as well as in the previous century on 6th September 1965, when Indian forces attempted to violate Pakistan’s sovereignty. Pakistan’s Defence Forces showed full resilience against Indian aggression. This sends a clear message that Pakistan is fully prepared to defend its territory against all threats.

The global threat landscape is in continuous evolution. The factor that is significantly impacting the future threat landscape is emerging technologies such as Artificial Intelligence (AI), Cyber, Sensors, Quantum, Computing, etc. The interplay of emerging technologies in six domains of warfare; i.e. land, sea, air, space, cyber and cognitive, would complicate the battlegrounds in a manner that no domain alone would be enough to conjure the conquest. It would be negligent to contemplate that all these domains operate in silos; instead, they constantly interact and work interchangeably. Therefore, to develop a strategy for future warfare that does not cater to all these domains, would be misleading. Keeping this emerging threat landscape in mind, Pakistan Defence Forces must continue to evolve their military strategies and doctrines to meet future demands.

To address similar emerging threats, the US Department of Defense (DoD) has devised a concept titled ‘Joint All-Domain Command and Control (JADC2).’ JADC2 connects sensors from all the US military forces i.e. Air Force, Army, Marine Corps, Navy and Space Force into a single operating network. This concept combines all the physical domains (land, naval, air, and space) with the information domain (cyber and cognitive). It has transformed the traditional tactical network concept into a modern tactical framework that knits all forces in a single computer network. This, in turn, will assist in delivering a joint response to the adversaries. As the US is technologically advanced, it is developing new technologies to incorporate within JADC2. US DoD has given this responsibility to Lockheed Martin to establish platforms for Joint All-Domain Operations (JADO). Lockheed Martin plans to launch a three-satellite test bed in 2023 to demonstrate a Space-Augmented JADO Environment.

Similarly, India has been brainstorming the possibility of integrating land, air and sea domains under Multi-Domain Operations (MDO). Indian Defence Forces will incorporate innovative technology, both indigenous and foreign-acquired, to compensate for the weaknesses and vulnerabilities of other forces. In 2021, a seminar was conducted on this battle concept by the Indian Army analysed India’s preparedness in MDO. It also examined jointness of the forces and the measures required to achieve cohesion as a joint force. The seminar also discussed the need to restructure the forces to incorporate the MDO. Today, India operates in the domains of land, air and sea and has the capability to operate in space and cyber domains; however, it has not announced space and cyber command yet. The Indian army is in the process of owning a set of multi-band satellite by 2025. These satellites will integrate tactical communication for the pilots in the air, sailors in the sea and troops on the ground, the command and control station and other fire support platforms.

Pakistan’s Defence Forces have skilfully accomplished Multi-Domain Operations (MDO) when Pakistan Air Force, Pakistan Army, Pakistan Navy, Special Forces, and Paramilitary Forces coordinated to counter terrorism during operation Zarb-e-Azb. During this operation, PAF delivered ISR and precision-guided air strikes, Pakistan Army and Paramilitary Forces carried out offensive ground operations, and Pakistan Navy and Special Forces provided strategic communication. It showed that Pakistan’s Defence Forces are in-sync to exhibit greater coordination but the efforts have been of fundamental levels of MDO. Therefore, a whole-sum war-fight concept that integrates relevant technologies, in all six domains, could give Pakistan’s Defence Forces considerable leverage over the enemy. Such a warfighting concept in Pakistan could be named Converged Battle Domains (CBD). This will converge the best tactical, operational and strategic practices from all domains to deliver an optimal response. Cross-organisational teams of all stakeholders can be formed to evolve the concept of CBD. The main objective of CBD would be to ensure collaborative deterrence and response against threats in all domains.

Maheen Shafeeq is a researcher at the Centre for Aerospace & Security Studies (CASS), Islamabad, Pakistan. She holds a master’s degree in International Relations from the University of Sheffield, UK. She can be reached at cass.thinkers@gmail.com