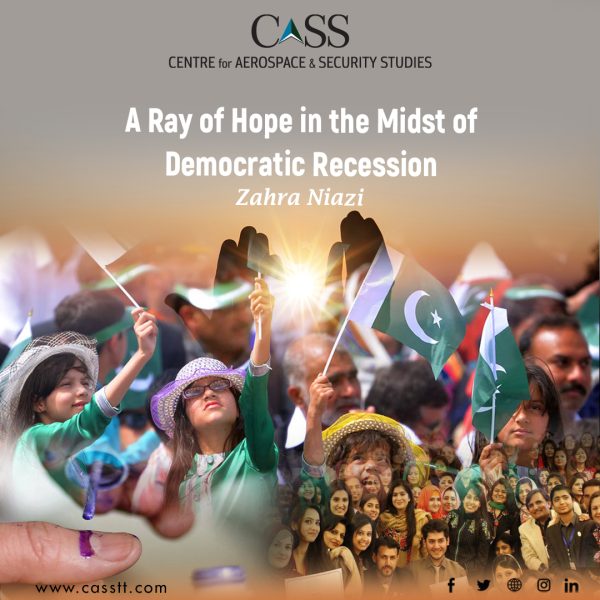 As a Pakistani citizen, hardly anybody would deny that all democratic tenures in the country have been imperfect, and the basic tenets of democracy have been undermined time and again, albeit to varying degrees. In fact, in this day and age, even those democracies that claim to be its champions are rarely perfect. However, recent months have witnessed democracy in Pakistan being weakened to an extent that is not only unfortunate but also unprecedented. In the midst of all this, hope remains as long as the fearless electors of democracy continue to stand by the struggle to uphold democracy, beginning with the restoration of a government that is elected directly through popular voting, i.e., the very foundation of democratic governance. Despite attempts to push them to the margins and struggling with despair and discontent at times, these brave men and women have proven to be resilient and have shown a commendable commitment to endeavour for what they believe is right.

The versions of democracy we have witnessed in Pakistan have been distinctive but never reflective of a truly ‘meaningful democracy.’ There have undoubtedly been several anxious moments during the democratic tenures in the country. Civil liberties have been violated, authoritarian enclaves have existed, the rule of law has been dishonoured, and horizontal accountability has been discounted time after time. The degree of prevalence of these features has, however, considerably varied. At times, it has been relatively less and, at other times, considerable.

However, the current frustration of the citizens with the deterioration of political rights and the rule of law in Pakistan is perhaps the most striking. There is visibly widespread public exasperation and anguish. Nevertheless, the good news is that the strength with which these Pakistanis are embracing and endorsing democratic values has never been seen before. People are increasingly overcoming the shackles of fear and forging a force that is not only demanding change but is an embodiment of change itself. They struggle with hopelessness and powerlessness at times but are no longer ready to settle for less nor continue living in a world as it is. Amid all the chaos, their sense of ebullience that they are now awakened is heartening to see, as a few years ago, the idea that things could change appeared alien to many. Children as young as seven and eight years old are becoming an active part of this change, and people can be seen understanding politics like never before. Raising ‘public awareness’ about politics no longer remains a matter of concern.

This refusal to settle for anything less shows that they can help establish a system that is not far from a meaningful and consolidated democracy, if not completely reflective of it. While their acute goal remains to advocate for the restoration of a government elected directly through ‘free and fair’ elections, their degree of passion and devotion shows that their struggle will not end with that. They will continue to champion and push for widespread political and institutional reforms and protection of their civil liberties.

In the end, it is important to assert that the struggle for democracy is worth it. Democracy remains the best way to advance peaceful and prosperous societies. Autocratic tendencies in democracies could be conducive to guaranteeing a sound economy in the short run in some cases but not individual and collective gratification, which is conditioned upon the exercise of one’s agency of free will in accordance with one’s own wants and needs, and the guarantee of individual freedom. This individual and collective gratification is a prerequisite of peaceful societies. Moreover, the higher the empowering environment, the greater the likelihood of inventiveness, through innovations, which facilitates the introduction of breakthrough economic reforms. Such an innovation-driven economic model would certainly ensure sustainable economic growth.

Zahra Niazi is a Research Assistant at the Centre for Aerospace & Security Studies (CASS), Islamabad, Pakistan. She can be reached at cass.thinkers@casstt.com.