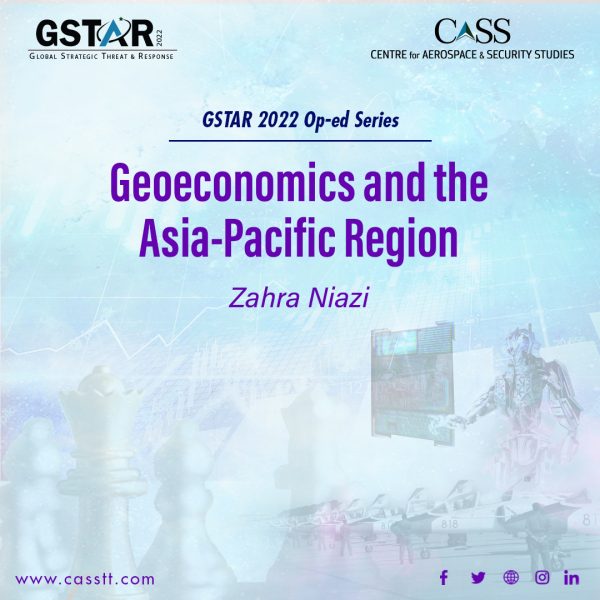 First coined by geostrategist Edward Luttwak in 1990 to describe economics as the primary domain for rivalry among countries in the post-Cold War era, ‘geoeconomics’ has gained notable prominence in theory and practice, particularly over the past decade. ‘Geoeconomics’ encompasses ‘the conversion of economic assets into political influence and the mobilization of political power to achieve economic objectives through a mix of competition and cooperation.’ Leading international think tanks such as the Council of Foreign Relations, Chatham House, and the European Council of Foreign Relations, among others, have produced an expansive body of research on the subject. In practice, states have been increasingly pursuing their political and strategic objectives through economic means. Some of its most prominent demonstrations include the United States’ ‘Pivot to Asia Strategy’; China’s ‘New Silk Road Project’; Western states’ employment of economic sanctions to achieve political objectives; the use of development lending as a means of financial statecraft; and Beijing’s initiatives to internationalise the renminbi.

The Asia-Pacific region is one of the regions where ‘geo-economics’ is not only increasingly at play by the leading global powers but also rapidly evolving. In 2011, the US, under the Obama administration, launched the ‘Pivot to Asia’ strategy to counter China’s rise, with the foundation of the ‘Trans-Pacific Partnership (TPP) Agreement’ in early 2016 being one of its most notable demonstrations, which was, however, later abandoned under the Trump administration. In May 2022, President Biden launched the ‘Indo-Pacific Economic Framework for Prosperity (IPEF)’ to further economic integration in the Asia-Pacific region, on which negotiations began last month. Moreover, the US has been deepening trade and commercial ties with individual countries in the region. At the beginning of this year, the US and Pakistan under the ‘Pakistan-United States Trade and Investment Framework Agreement (TIFA)’ also vowed to strengthen their trade and business ties.

China has been an equally active economic player in the region. In 2013, China launched its flagship project – now termed the Belt and Road Initiative (BRI) – to finance and establish connectivity across six economic corridors, including, Eurasian countries, Mongolia and Russia, Pakistan, other countries in the Indian subcontinent, Central and West Asia, and Indochina. This involves a significant part of the Asia-Pacific region. China also leads the Regional Comprehensive Economic Partnership (RCEP) i.e., one of the biggest free trade deals among 15 nations in the Asia-Pacific region aimed at uniting trade rules, reducing tariffs, and strengthening supply chains.

Moreover, given Russia’s confrontation with the West, the Kremlin has made determined efforts to connect with and increase its economic influence in the Asia-Pacific region, particularly by exporting its natural resources. This has brought its own set of complex challenges for the regional states, including Pakistan, which have to strike a balance between maintaining ties with the major geoeconomic players in the region.

In this context, it remains pertinent to highlight the implications of this great-power rivalry in the geoeconomic domain, specifically for regional countries in the Asia-Pacific, and discuss the potential way forward. It also remains a matter of necessity to ascertain the ways through which peaceful regional connectivity and prosperity can be furthered, particularly in the context of BRI.

In order to discuss these important and time-relevant subject areas, the Centre for Aerospace & Security Studies (CASS), Islamabad in its ‘Global Strategic Threat and Response (GSTAR)’ conference this year will conduct an exclusive session on ‘Geoeconomics: Driver of the Asian Century.’ Moderated by Dr Usman Chohan – Director of Economic Affairs and National Development at CASS, the session will host leading international thinkers, including; Dr Karl Moore – Professor at the Desautels Faculty of Management, McGill University, Canada; Dr Una Aleksandra Bērziņa-Čerenkova – Head of Political Science PhD program and China Studies Centre at Riga Stradins University, Latvia; and Dr Wang Wen – Professor and Executive Dean at Chongyang Institute for Financial Studies at the Renmin University of China.

In her address, Una Aleksandra Bērziņa-Čerenkova will discuss the trajectory of great-power rivalry in the Asia-Pacific, including its geoeconomic domain and its impacts in the region. Karl Moore will offer expert views on how the third-party countries can play neutrally in this rivalry and the lessons for Pakistan from those countries, the future of globalisation in the context of geoeconomic competition, and possible trajectory of future leadership in Asia and the West. Wang Wen will discuss the role of BRI in furthering peaceful regional connectivity, how Pakistan and China can collectively facilitate it, and the factors that continue to pose systemic risks in the Asia-Pacific region.

Last but not the least, Pakistan’s National Security Policy (NSP) launched this year explicitly suggested a paradigm shift of the country’s strategic calculus from geopolitics to geoeconomics. However, while many remain familiar with this paradigm shift, a thorough understanding of the underlying motives behind it remains in the knowledge of a few. In light of this, the session’s Keynote Address to be delivered by Dr Moeed Yusuf will help contextualise this transformation, while also throwing light on Pakistan’s expectations of its immediate neighbours and other regional partners in fostering a better geoeconomic climate and Pakistan’s current strengths, as well as limitations, in executing this paradigm shift.

All in all, the entire session will help inform our understanding of the role of geoeconomics in the contemporary strategic environment, particularly in the Asia-Pacific region, its regional implications, and the way forward.

Zahra Niazi is a Researcher at the Centre for Aerospace & Security Studies (CASS), Islamabad, Pakistan. The article forthcoming in Hilal Magazine. She can be reached at cass.thinkers@gmail.com.