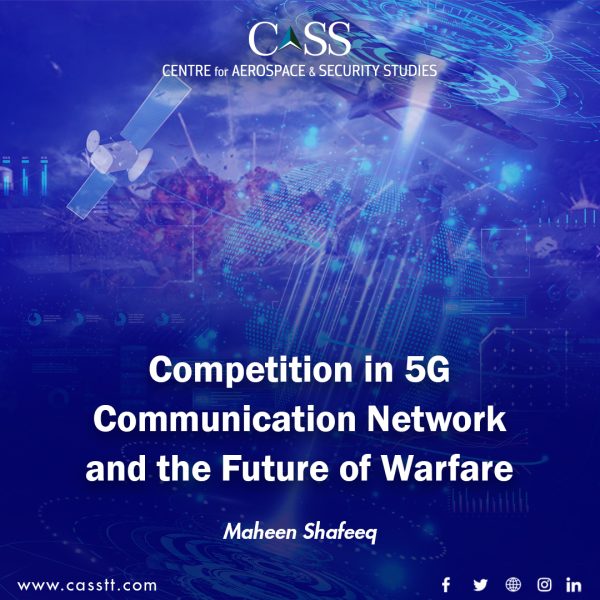 The present era is experiencing a shift from 4G (4th Generation) to 5G (5th Generation) networked communication. This shift will radically change all civil and defence communications. In future warfare, it is expected to develop an atmosphere of information or ‘infosphere’ for sharing real-time intelligence characterised by high-speed, low latency and increased bandwidth networks. This potential of 5G is believed to significantly impact the character and future of war. It will enable an agile and fast data communication service that will support the entire battlefield network in integrated and all-domain warfare. This support will allow the speedy transfer of all types of visual and textual data and information from one domain to another, increasing the speed of war. 5G would not only connect all domains of the battleground, but it would also link disconnected networks through network slicing. This will enable remote operations with more private, secure, and restricted access. Due to the super-fast speed of the 5G network, it can afford to carry out multiple isolated functions side-by-side.

The United States (US) and China have been competing to take the lead in 5G technologies. The major 5G telecoms in the US have deployed their initial nationwide networks. On the other hand, all cities in China and 87% of its rural areas have a 5G network. The Chinese defence forces are now focused on benefitting from 6G communication technologies to adapt to the demands of future warfare.

The US is expected to deploy 5G on its Forward Operating Bases (FOBs) as these are crucial points for collecting intelligence for launching and defending attacks.  US troops also have access to 5G-enabled Android Team Awareness Kits that display data on a tablet or smartphone.  Similarly, Chinese troops have also been provided with gadgets that will allow tracking of troops, terrain and intelligence on battlegrounds. China has also deployed 5G on the China-India border to monitor Indian military activities.

India has launched an initiative called 5G India (5Gi). Under this initiative, India has given the responsibility to establish end-to-end 5G test beds to research centres such as the Centre of Excellence in Wireless Technology (CEWiT) and the Society for Applied Microwave Electronics Engineering & Research (SAMEER), technical universities such as Indian Institute of Technology Madras, Delhi, Hyderabad, Kanpur and Bombay and Indian Institute of Science, Bangalore.  The country is proactive in developing indigenous 5G communication networks. For this, it has provided competitive grants and has created a 5G Alliance Fund that would provide necessary financial assistance for 5G evolution. The Indian Army is also working to develop and deploy 5G networks to improve communication for its frontline forces, which could have implications for Pakistan.

The Ministry of Information Technology and Telecommunication has laid a roadmap for 5G in Pakistan. The Pakistani telecom operators, including PTCL, Telenor, Zong and Jazz, have successfully tested 5G in Pakistan. 5G was expected to be launched in 2023; however, progress were delayed due to political instability in the country. According to a study by the Pakistan Institute of Development Economics (PIDE), the exorbitant tax on phones and lack of availability of 5G enabled phones in Pakistan might hinder the evolution of 5G. Pakistan has also collaborated with China to facilitate the launch of 5G technology. China’s technological support and the efforts of the telecom industry has been the key force behind 5G success in Pakistan. A similar roadmap can be adapted for other emerging technologies such as AI, cyber and space.

5G is a leap forward in complex communication networks. Although it will significantly enhance communication speed, it will neither diminish nor eliminate the importance of 4G and 3G networks. Instead, 5G will support other emerging technologies such as Cloud, Quantum Computing, the Internet of Things, etc. Each decade, the world will upgrade its generation of networks such as 6G and 7G. The deployment of 5G networks is the need of the hour, given the growing demand for connectivity. Therefore, this is a step in the right direction, and Pakistan must also get on board to quickly set up 5G network towers in the country.

Maheen Shafeeq is a researcher at the Centre for Aerospace & Security Studies (CASS), Islamabad, Pakistan. She holds a master’s degree in International Relations from the University of Sheffield, UK.