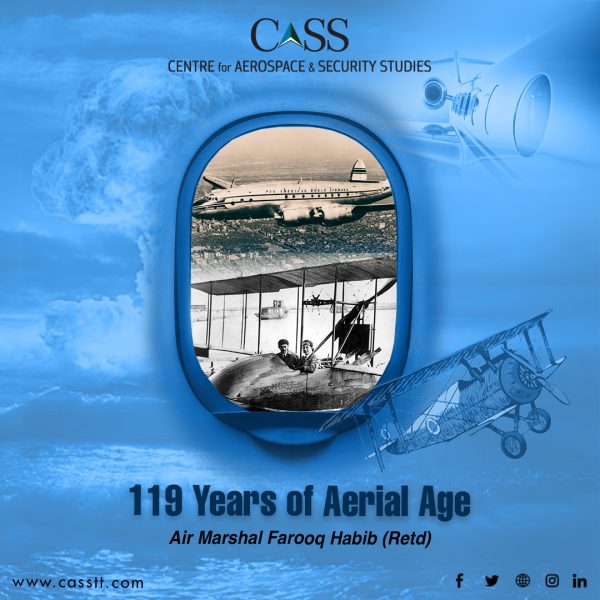 The pattern of human progress has been anything but linear.  At important junctures of history, critical discoveries, inventions and innovations tend to open up the floodgates of possibilities resulting in exponential progress and transformation of the antiquated structures of society.  Starting from fire, wheel and nails to gunpowder, printing press, penicillin, and microchip, the list of vital breakthroughs is unending. One such crucial invention, which decisively altered human life, relates to the flight of a heavier-than-air machine on 17 December 1903.

It was a typical winter day at Kitty Hawk, North Carolina, United States, with freezing wind blowing at more than 25 miles/hour. For the two Wright brothers, it was a good sign, though. The surging headwind facilitated a smooth take-off of their bi-plane, Wright Flyer, for its maiden flight which lasted only 12 seconds, covering a modest distance of 120 feet. The bi-plane made three more fights that day, the last one being the longest (59 seconds).  Incidentally, it was damaged beyond repair after the fourth sortie. But history was made, and there was no looking back for the aerial age.

Air transport has had tremendous impact on the lives of humans.  Most importantly, it shattered the physical and mental barriers, imposed by the vastness of distances, unnavigable oceans and insurmountable stretches of land.  The interaction of ideas, knowledge, cultures, and societies, made possible through speedy and convenient aerial travel, has incredibly accelerated the pace of development around the world. Above all, the much-hyped transformation of the planet into a ‘global village’ would not have been possible without the proliferation of air transport in our daily lives.

Throughout human history, wars have tended to facilitate innovations and advancements in technology. It is no wonder that World War I, which commenced just eleven years after the maiden flight of the Wright brothers, provided an impetus to the field of aviation. Though induction of the aeroplane in the arena of combat was marked by initial scepticism, the vast potential of a machine operating in the third dimension over the battlefield was quickly recognised.  In five years of the war, rapid progress was made in the design, performance and employment of the aircraft.  Its utility in the war can be gauged from the fact that Britain, which had entered the conflict with just 272 machines, amassed an inventory of 22,000 airplanes before the war ended.

The progress continued, in tandem, on the commercial use of airplanes as well. The world’s first ’regularly scheduled heavier-than-air airline’ called the St. Petersburg–Tampa Airboat Line was launched in 1914, the year World War I commenced, taking off from St. Petersburg, Florida, and landing 23 minutes later at Tampa. The owner of the company, prophetically commented, ‘What was impossible yesterday is an accomplishment of today – while tomorrow heralds the unbelievable.’

Indeed, ‘unbelievable’ has been heralding ‘every tomorrow’ ever since. Soon after, Pan American Airways achieved another milestone by traversing the transatlantic route, flying between New York and Marseilles, in 1939, incidentally the year which saw the beginning of World War II. The introduction of jet engines in 1950s further revolutionised air travel, adding speed, comfort and efficiency to the experience, and marking the arrival of the era of mass air travel.  The number of air passengers has continued to grow regularly each year, reaching a figure of over four billion in 2020 before the Pandemic. Guided by an unending quest of more economy, safety, comfort and environmental friendliness, the future promises many new concepts, designs and technologies for the aviation industry.

In the military domain, effectiveness of the aircraft was established beyond any doubt in World War II. Beginning as a major contributor to the success of Blitzkrieg strategy, the role of airpower continued to expand as the war progressed. After Japan surrendered following the US nuclear attacks, airpower began to be seen as one of the main pillars of the strategy of deterrence, which dominated the Cold War era. In various conflicts during this period, the role of airpower continued to evolve in the wake of new concepts and technology. Additionally, effective leadership, training and individual excellence played an important part in its successful employment, as evident in the Indo-Pak and Arab-Israeli wars.

The world experienced a wide spectrum of conflicts in the post-Cold War era ranging from full-scale war to low-intensity and sub-conventional operations. Airpower, with its astounding characteristic of flexibility, was able to perform exceedingly well in meeting the divergent requirements of these conflicts.  Such versatile applicability has rendered airpower as the weapon of first choice for politicians and military leaders around the world.

The last 119 years of aviation, in all its functions, has been an audacious journey, propelled by the unwavering spirit and optimism of ‘airmen’ and ‘airwomen’ who risked their careers, finances, reputations and lives to secure a rightful place for the flying machine. All along, technology has remained the catalyst, delivering the ‘improbable’ at breath-taking speed. If the past is any guide, the future of aviation is certain to usher in more of the ‘impossible’.

Air Marshal Farooq Habib (Retd) is presently working as Senior Director at the Centre for Aerospace & Security Studies (CASS), Islamabad, Pakistan. The article was first published in The Nation. He can be contacted at: dir.nationalsec@casstt.com