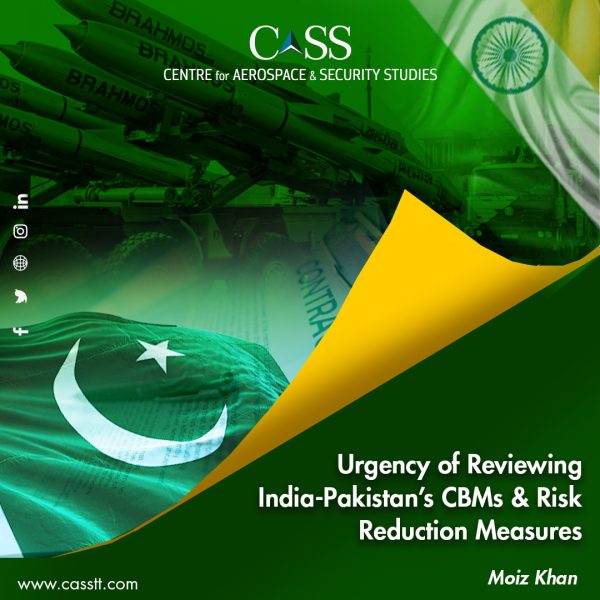 In an unprecedented event on March 9, 2022, India launched a missile, reportedly identified as the BrahMos supersonic cruise missile, which landed in Pakistan. After crossing the international border, the missile travelled 124 kilometres at an altitude of 40,000 feet into Pakistani airspace before impacting near the city of Mian Channu, Khanewal District. Following the incident, India started issuing clarification statements only after Pakistan reported the matter. In its first statement, India noted that the missile was accidently launched owing to a technical malfunction. Later, the Indian government changed its statement and termed it a human error, involving ‘possible lapses on part a Group Captain and a few others.’ Around six months later, India terminated the services of three Indian Air Force (IAF) officers, after a Court of Inquiry found ‘deviation from the Standard Operating Procedures (SOPs)’ by the officers and held them responsible for misfiring the missile.

Pakistan has rejected the purported closure of the incident and called the findings of the Court of Inquiry unsatisfactory and inadequate. While reiterating its call for a joint probe, Pakistan not only termed Indian clarifications ‘simplistic’ but also criticised the country for failing to immediately inform when the missile was launched. India’s failure to communicate the incident violated the 1991 agreement with Pakistan on preventing air space violations. Under the agreement, both India and Pakistan have to inform and investigate inadvertent violations of airspace promptly. Meanwhile, India also failed to activate the high-level military hotline to inform Pakistan. Both the countries maintain mechanisms of hotline contact between their Director Generals of Military Operations (DGMOs) to resolve misunderstandings.

Fortunately, the missile was unarmed and no lives were lost. Pakistan also responded towards the situation with restraint. However, the incident marks an alarmist event. Whether the incident was an accidental launch, an unauthorised launch, or a simulated exercise, it suggests not only shortcomings in India’s technical and procedural system but also shows its irresponsible behaviour as a nuclear weapon state. The incident also raises numerous questions about the country’s safety protocols, Command and Control (C2) of nuclear weapons and missiles, and communication mechanisms. The situation would have escalated if the accident had led to destruction or loss of lives, since there were several indications that Pakistani authorities had considered retaliation. Second, if the incident had taken place during a crisis, it could have led to inadvertent military escalation owing to miscalculations.

In this regard, there is a great urgency that both India and Pakistan collaborate on Confidence Building Measures (CBMs) to ensure that such accidents or unauthorised launches do not take place in the future. Even if they do, the two countries should be able to inform each other before any military response.

First, India and Pakistan need to review their joint 2005 Agreement on the Pre-Notification of Flight Testing of Ballistic Missiles. The agreement covers surface-to-surface ballistic missiles only, and each country provides at least three days’ notice for a test launch. Both countries are obligated to not situate test launch sites within 40 kilometres of their shared border nor land a weapon closer than 70 kilometres from the border. However, the agreement has its limitations as it does not cover cruise missiles. In 2005, New Delhi declined to accept Islamabad’s proposal to include launch of cruise missiles in their joint agreement on pre-notification of ballistic missile launches. Currently, Pakistan and India have multiple and diverse types cruise missiles in their arsenal with high ranges. There is an urgency of expanding the pre-notification regime to include cruise missiles, including surface, air or sea-launched versions to avoid misunderstanding. Second, in order to avoid accidents in case of routine maintenance or inspection, India should efficiently and professionally ensure safety precautions regarding its missiles.

Additionally, India and Pakistan could also consider devising new Risk Reduction Measures (RRMs). For example, missiles that are scheduled to be inspected, both countries need to configure their weapons’ guidance systems to unoccupied places such as oceans or deserts where they pose minimum dangers. Moreover, the weapons’ pre-fed adversary target locations need to be removed while used for inspection, training, or simulated exercises. The maintenance of actual coordinates of adversary targets could lead to unintended escalation in accidental launches. These measures would not only help avoid accidents, they could also serve as an added layer of protocol to minimise the possibility of unauthorised launch.

However, accidents happen despite best safety protocols as there are limits of safety procedures. In such a possibility, there is a need of haste to communicate accidental launches. India needs to make use of existing channels of communication to avoid miscalculations in times of crises. The BrahMos missile incident indicates that crisis could erupt quite quickly between India and Pakistan. Unless the two countries adhere to their existing CBMs and establish new measures, mitigating such incidents and preventing risk of escalation could become a Gordian knot.

Moiz Khan is a Researcher at the Centre for Aerospace & Security Studies (CASS), Islamabad, Pakistan. The article was first published in Modern Diplomacy.