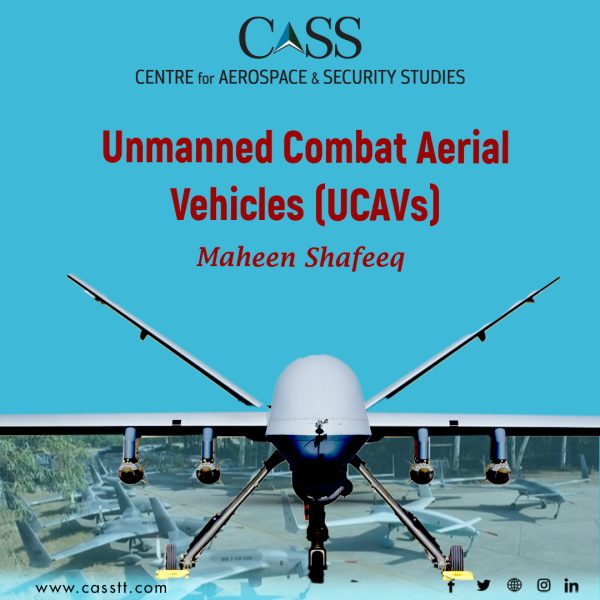 The use of drones for intelligence, surveillance and reconnaissance (ISR) has become a routine of militaries worldwide. However, with the intensifying threat levels and emerging technologies, militaries are resorting to combat drones, also known as Unmanned Combat Aerial Vehicles (UCAVs). UCAVs are drones that operate with assistance from the ground system and can function autonomously or semi-autonomously. In addition to carrying out ISR, UCAVs can conduct complex battle missions.

UCAVs can carry a diverse payload of weapons, such as guided bombs and air-to-ground missiles. They are equipped with advanced technologies, for example, a Global System for Mobile communications (GSM), synthetic aperture radar (SAR), intelligent communication and tracking systems, identification of friend and foe (IFF) system, laser designator, laser finder and so on. UCAVs have extended range, an endurance period of up to 40 hours and can reach a maximum altitude of 50,000 feet. Such capabilities would significantly enhance the operational competence of not only air forces but also the army, naval, space and cyber forces by giving them diverse response and engagement tactics.

Future UCAVs are expected to be equipped with multiple payloads and warheads. They would have an onboard processing unit fitted with Artificial Intelligence (AI) and Machine Learning (ML) algorithms capable of processing real-time information within milliseconds. These systems would have early warning and response capabilities with which they would be able to identify and neutralise an incoming threat. Future UCAVs would also be able to develop a 5D position of threats and will be equipped with air-to-air missiles. It is also expected that future UCAVs will be able to operate in space and have beyond visual line of sight.

Although these developments will significantly revolutionise warfighting, UCAVs will not replace pilots as they are not yet capable of performing functions that pilots are trained to perform. It might take decades before technology has reached a super-level to replace humans. Nevertheless, UCAVs have commenced an era of unmanned and irregular warfare and states are getting on-board with the idea.

The UCAVs (or combat drones) era began when the United States (US) conducted a drone strike in Afghanistan in 2001. The role of UCAVs has not reduced since. The present-day conventional warfare, such as Armenia and Azerbaijan’s dispute over the Nagorno-Karabakh region, saw extensive use of UCAVs. Azerbaijan’s deployment of UCAVs was pivotal to its operational success.

Similarly, UCAVs were used in the Ukraine-Russia conflict. The Russian forces have used Iranian-made Shahed-136 drones that fly low in swarms and are hard to detect on radars. Ukraine has depended on Turkish-made Bayraktar TB2 to attack Russian military bases.

Turkey has emerged as one of the leading countries in designing, developing and exporting UCAVs. The Bayraktar and Bayraktar TB2 are the most famous UCAVs. Bayraktar TB3 is also in the works and it is expected that it will be able to carry and launch other munition drones. It is also reported that by 2023, Turkey will test a version of UCAVs reaching the speed of Mach 0.7. A Turkish firm has also unveiled UCAVs equipped with various warheads.

India tested its first indigenously produced UCAV Rustom II in 2016. It is a medium-altitude long-endurance (MALE) combat drone designed to carry up to 350 kg payload. The payloads are Israeli-sourced and consist of electro-optic and infrared sensors, electronic intelligence (ELINT), and communication intelligence (COMINT). It is reported that Rustom II would be able to carry the anti-tank missile HELINA. Besides this, India purchased 50 Heron drones from Israel in 2019. Indian Navy has a US-made MQ-9B drone for surveillance in the Indian Ocean, while the Indian Air Force operates more than 150 Israeli-made Harop drones and the Indian Army has Harpy, an Israeli-made ‘fire-and-forget’ drone with high hit accuracy.

Recent employment of UCAVs in conflicts in Europe, for instance, Azerbaijan versus Armenia and Ukraine-Russia war, have demonstrated that the employment of UCAVs would make future wars more lethal and intense as the technology matures. Due to this, UCAVs would become an attractive option compared to traditional manned platforms and this trend is likely to grow in future wars.

Maheen Shafeeq is a Research Assistant at the Centre for Aerospace & Security Studies (CASS), Islamabad, Pakistan. She holds a Master’s Degree in International Relations from the University of Sheffield, UK. She can be reached at cass.thinkers@casstt.com.