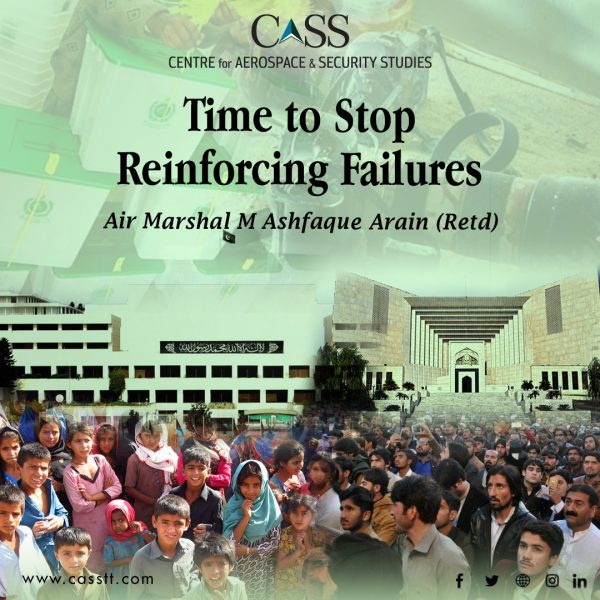 The traditional Chinese curse, ‘may you live in interesting times’ apparently a blessing is ironically used to suggest that life is better in ‘uninteresting times’ of peace and tranquility as compared to ‘interesting’ ones, which are mostly times of trouble.  This seems true for today’s Pakistan. For the past few months, unlike any other country of the world where major turns come at infrequent intervals, there seem to be developments of national consequences on hourly basis, and this is true for all aspects of life.

The foremost being the political crises in the country with monumental developments. After the change of government as a result a Vote of No Confidence, a government was cobbled together with the coalition of a dozen or so parties with opposing ideologies, who have historically been competitors. Ever since, the political scene has been evolving at an unthinkable scale and in unexpected directions.

While the coming together of these parties was a surprise, the public was further baffled with the selection of Cabinet members, with a majority under investigation for criminal acts or financial issues with most of the cases having been framed during previous governments of some of these coalition partners. Hasty amendments in the National Accountability Bureau (NAB) laws and quick decisions in favour of the accused who now were in power, led to strong negative perceptions in the public.

The government’s focus on amending NAB laws, getting their cases quashed and efforts to curb the opposition resulted in its failure to address the everyday issues affecting the public. Despite warnings of unprecedented rains and consequent floods, the government failed to take any proactive measures and later was unable to support the affected people. The equally unprecedented depreciation in the value of the rupee, unbearable inflation, worsening law and order situation and government’s inaction to help affected and displaced flood victims in addition to creating a dislike for the ruling elite helped the ousted Prime Minister to build his narrative. Use of force against dissenting voices further alienated the public from the government and made the opposition stronger.

Faced with the growing acceptability of the opposition’s narrative in the public and negative perceptions about the governance of the incumbents, decision-makers resorted to 20th Century tactics to control the situation. It seems they are still living in the 70s and do not realise the working as well as impact of 21st Century communication systems. They seem to ignore the fact that with an increasingly high number of internet users in Pakistan, introduction of social media has brought about a sea change in the availability of information to the common man.

Resorting to blackout of the opposition from mainstream print and electronic media, failed as the public quickly switched over to social media platforms such as YouTube, Facebook, Twitter and WhatsApp etc. and the information flow continued. Dissenting mainstream media houses were banned, however, they continued their transmissions on social media platforms. Seeing their own failure, dissenting voices were threatened, FIRs registered in far flung areas of the country, and later some were picked up and allegedly tortured and humiliated. New rules were introduced, and social media activists were also threatened. Concurrently, FIRs were registered against senior leadership of the opposition, and cases were registered against few were for statements of much lesser consequences than had previously been made by some of the ruling leadership. At the same time, ruling parties also resorted to unprecedented press conferences featuring representatives from all the coalition partners. All these developments and events unfolding on 25th May which included sudden extension of Red Zone, picking up people from their houses, tear gassing and use of force on peaceful protestors left an indelible impression in the minds of the public.

The recent incidents which include death of a senior journalist in a foreign land, assassination attempt on an Ex Prime Minister and alleged video of a Senator and the statements coming from responsible office holders have taken things to another level. Frequently changing statements, portraying the victim as the accused, further blackout on print and electronic media etc. are adding more fuel to fire. All these steps have not only failed, but each step has helped the opposition to strengthen its narrative and garner increasing public support. This has also dented the credibility and impartiality of many.

In any democratic system or supposed democratic system, the opposition has the fundamental right to protest. Curbing freedom of speech, ordering blackouts on mainstream media and employing state machinery to harass the opposition leadership or supporting public are highlights of dictatorial or autocratic regimes. Such regimes are no longer acceptable in the 21st Century.

Sometimes, perceptions become more important than the reality, and fortunately or unfortunately, social media plays an important role, especially, when the mainstream media is considered biased or unreliable. Therefore, continuation of these tactics will further negatively impact the existing perceptions and damage the government narrative, strengthen the opposition’s narrative, garner more public support and affect the credibility of all institutions. If continued with the same focus, the opposition will continue to strengthen and this may lead to unwarranted and unexpected reactions.

At this time, there is a need for prudence, patience, and flexibility, more so from those who exercise power. The steps should include avoiding to push the opposition in the corner using state power. The government should instead focus on rehabilitation of flood victims, controlling price hike and improving law and order. Judiciary can play its role by holding impartial inquiries into a journalist’s killing, murder attempt on an Ex PM and multiple video scams involving senior politicians. Mutually agreed decision on election schedule and changes in the Election Commission of Pakistan will help in discontinuation of the long march.   All institutions must not only act but also be seen to be impartial.  On the contrary, continuation with reinforcing failures will only add to the damages, which is neither sustainable nor something Pakistan can afford.

The author is a retired Air Marshal of the PAF who served as Pakistan’s Air Advisor at New Delhi from 2002-06, presently working as Advisor to Chief of Air Staff on CASS Affairs and Director of Emerging Technologies at the Centre for Aerospace & Security Studies, Islamabad, Pakistan. The article was first published in Pakistan Observer. He can be reached at advtocas@casstt.com.