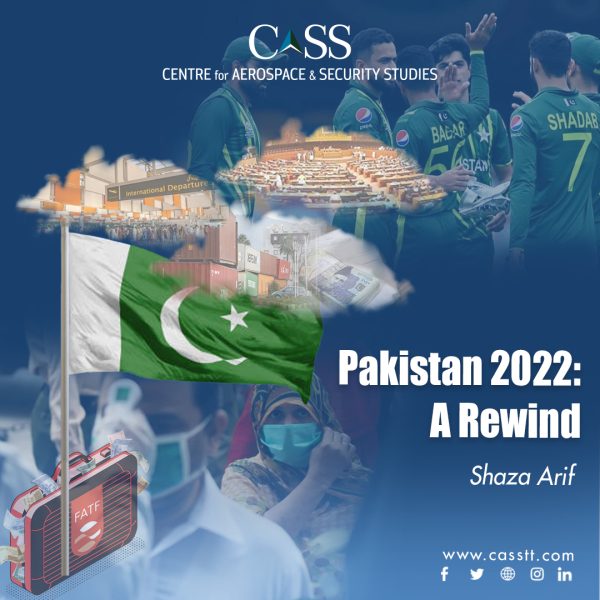 December is usually known for joyous celebrations as the world awaits a new year with new hope and resolutions. As everyone gears up for 2023, it is also a moment to reflect back on the important developments that occurred in the passing year. As far as Pakistan is concerned, unfortunately, 2022 has not been the best for many reasons. If there was a need to identify one phrase to define this year, it would be ‘uninterrupted political chaos and uncertainty’, which has overshadowed other important aspects and continues to hover like a dark cloud.

The state witnessed a significant change in the political landscape, and the situation has been unstable ever since. The changing dynamics, clearly visible from the initial part of the year, finally culminated in the replacement of the government with a new coalition set up in April 2022 via Vote of No Confidence (VONC). In contrast to perceptions, this transition of power was not smooth and has failed to find stability so far. Political instability was shortly followed by economic instability and heavy floods. Both adversely impacted a large part of the population. However, neither was given due projection and attention given that the major focus of the year was fixed on the political turmoil.  In addition, events such as the brutal murder of a renowned investigative journalist and a murder attempt on the head of a popular political party has further added fuel to the existing situation, creating further mistrust in public.

The unfolding of such events in Pakistan is indeed alarming at many levels. The constitutional and legal framework of the state is being questioned given the manner in which various aspects of the crisis have been managed. The rift between the President and Prime Minister’s office, followed by a tussle between the federal and provincial governments, took a toll on the reputation of these highly reputed offices. The overall political picture has also challenged the credibility of various state institutions and their role in state affairs.

To be fair, Pakistan has been prone to political upheavals over the past 75 years. The trickling of political tensions into the social fabric and streets is not surprising, but the public emotion is vividly more intense this time. The political polarisation, which has surged to an unprecedented level, is taking a toll on society as a whole. The damage being done appears irreparable, at least for the short-term. Moreover, the ‘container raj’ on the roads owing to the culture of ‘long marches’ and the corresponding resistance has become a norm for the residents of the twin cities of Islamabad and Rawalpindi and has contributed to economic woes apart from being a source of commute inconvenience.

The problems confronted by the state need due attention. It is worrying to learn that a recent survey conducted by PIDE revealed that 37% of the population wishes to leave the country if they get an opportunity. Furthermore, the situation is even more concerning vis-à-vis the youth. As per the report, of the male citizens (aged 15-24 years), 62% desire to leave the country. This desire was weakest among the people who have never been to school, i.e., 22%. On the other hand, educated individuals have a greater urge to migrate, which can have considerable implications for the state. The survey is not directly linked to the political crisis but can be used to have an idea of the public pulse, while suggesting that further instability will deteriorate the situation.  The figures presented in the report are a wake-up call for each of us as to where the country is headed. Concerned stakeholders need to be cognizant that Pakistan cannot progress like this, and this unnecessary trend of political chaos needs to be discouraged, so that the core and basic issues of the people are prioritised.

As if this was all not enough, historic rains occurred causing unprecedented loss of life and property in most parts of the country due to super floods. The rehabilitation efforts remain underway and may take months, if not years, to recover from and rebuild.

Like every dark cloud has a silver lining, there were some positive developments to celebrate in these uncertain times. Throughout the year, the COVID-19 Pandemic remained within control and normalcy paved its way back. Prior to the political upheaval, Pakistan smoothly hosted the 48th session of the Council of Foreign Ministers (CFM) of the Organization of Islamic Cooperation (OIC) in Islamabad. Similarly, Pakistan’s exit from the FATF grey list was a major relief. The thrilling T20 World cup, in which Pakistan reached the tournament’s final match in the most dramatic way possible, was one of the positive episodes when the nation rejoiced collectively. Most recently, Pakistan’s efforts towards forming a ‘Fund for Loss and Damage’, as Chair of the Group of 77, bore fruit when the decision to establish the fund was announced at COP 27 in Sharm-El-Sheikh.

The succession of day and night is the architect of events,

The succession of day and night is the fountainhead of life and death.

Hence, every passing year should be used as a course correcting episode to learn from the mistakes done in the past and avoid them in the future. The year will end in a few weeks, but its legacy will remain intact.  Pakistan has seen a lot in this year and as we enter the last month of 2022, let us hope and pray that we see better times and better years ahead for our beloved homeland.

The writer is a Research Assistant at the Centre for Aerospace & Security Studies (CASS), Islamabad, Pakistan. The article was first published in the News International. She can be reached at: cass.thinkers@casstt.com