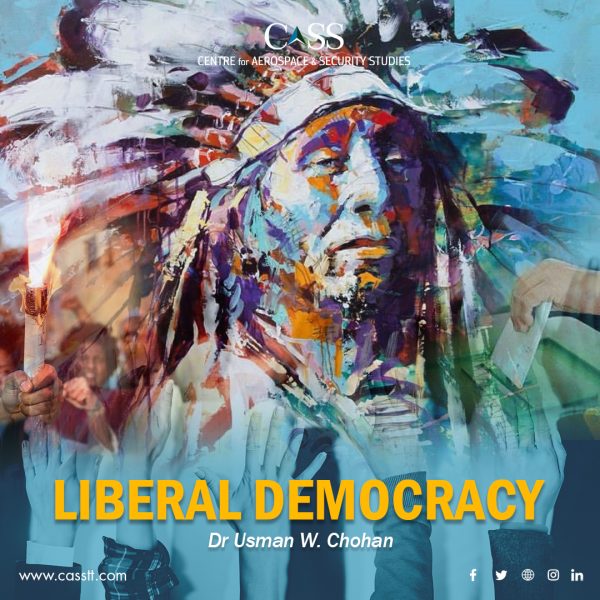 The archons of “Western democracy” have long professed the belief that liberal democratic ideals are universal and must therefore be spread across the world at any cost. Where they have not promoted the so-called Western democratic ideal, they have at least believed that it will eventually take hold due to its intrinsic merits. When this happens, Francis Fukuyama argued, it would be the “end of history” and the final sublime conclusion of civilisation. However, more often than not, Western powers have orchestrated regime changes overtly and covertly, knowing that a good nudge (with a pinch of violence) might speed things along.

Today, an emergent Cold War 2 is cocooned from the Western side in the garb of “democratic values” pitted against “autocratic regimes” such as Russia, North Korea and China. This rhetoric is incessantly repeated to domestic Western audiences to build a sense of animosity based on an incompatibility of autocratic systems at the deep-set level of “values.” This leads to strange bedfellows, of course, since the US President prances about fist-bumping despots in the Gulf, while also bankrolling the arming of fascists and fascist-sympathisers in India; not the best embodiments of liberal Western values, to say the least.

Nevertheless, the liberal concept of democracy, Western dogma alleges, stems from a long tradition of civilised government in the West that began in the ancient democracies of Greece and reached their ideological summit in the Enlightenment era, with white men wearing grey wigs penning wonderful treatises by candlelight, including those of Jean Jacques Rousseau, Jeremy Bentham, David Hume, Adam Smith, and John Locke among many others. It is through their well-informed and enlightened view of a transformed society, based on the conditions of Europe that they sought to improve, that the enlightenment thinkers came up with liberal concepts that must be taught to the coloured savages of the world to better their miserable lives, one is told.

This dogma is so deeply entrenched among the reading public in the West that to question it would be tantamount to medieval heresy, and the self-congratulatory pseudo-intellectuals of the West would rather die than relinquish credit for the Western genesis of liberal democracy.

This dogma is, however, precisely what was challenged in a recent tour de force by David Wengrow and (the now departed) David Graeber, two eminent anthropologists who have mustered a torrent of evidence in their monumental book The Dawn of Everything to challenge the notion that “the West” even came up with the precepts of liberalism. Instead, it was the contact with the First Nations of Canada (New France at the time) and the rest of North America which truly made Westerners think about the monstrous nature of kings, lords, usurers, and churches in their homeland.

The leaders of First Nations were, as many local and foreign accounts of the time profess, men and women endowed with deep powers of reason complemented by a worldview that situated them in harmony with the wider world. When these chiefs met with Western merchants, mercenaries, and missionaries, they not only extolled the virtues of their indigenous way of life and the happiness in which it abounded, but they raised piercing and profoundly well-constructed critiques of the sorrow, greed, pettiness and misery that characterised European society. The authors Graeber and Wengrow build a rich and detailed account of how these First Nations instead taught the Westerners about the importance of individual freedom and liberty, equality and fraternity among people, and participation in political, civic, and economic life.

One of the most influential among these First Nations was the Wedyat (Huron) through its leader Kandioronk, who lived on land that is now Montreal, Canada. Kandioronk was universally acclaimed, by both friends and foes, as a man of exceptional charisma, intelligence, strength and endurance. He would attend dinners at the Governor’s house and would give discourses so rich, eloquent and breathtaking, that the note-taking officer Baron Lahontan compiled them into a book titled Curious Dialogues with a Savage of Good Sense. Kandioronk had also served as an Ambassador of the Wendyat/Huron in France and had thus seen up-close, and with critical contempt, the debauched nature of European (mis)governance, (mis)management, and (mis)education at the time.

Baron Lanhontan’s collection of Kandioronk’s thoughts became an instant best-seller among the reading public back in Europe, because of the way that Kandioronk would point out the flaws of European society and why it needed a dose of (what we would now call) liberal values.

The discourses of Kandioronk were recorded during the 1680s and 1690s and were popular among Europe’s intellectual circles by the 1720s. In 1750, Jean Jacques Rousseau wrote an essay for a competition which repeated Kandioronk’s critiques and further popularised them, giving Rousseau a bit too much credit in the process. Meanwhile, other thinkers of the time also began to advocate superior elements of indigenous First Nations social systems as a remedy for European ills, without crediting the origination of the ideas. By the 1770s and 1780s, revolutions broke out in France and the United States which “began” the spread of liberal democratic values, but which was, as Graeber and Wengrowe recount, palpably not Western in its origins.

This new and better-informed reading of history, which points to the fact that liberal Western values did not originate in the West but rather among the indigenous peoples of the Americas, has several important implications. First, it relieves us of the hollow dogma by which “liberal democratic” values can be used as an insidious war cry against other nations, including against China these days. Second, it helps to show why Western countries prop up autocratic regimes in the first place and also curb civil liberties in their own countries since they are themselves not fully committed to this value system. Third, it gives us a greater appreciation for civilisations which are now gone (destroyed by the West, no less), but whose wisdom lives on. Fourth, it reduces the exaggerated role of the Greeks, who would have long been forgotten if not for the advancements made over their work during the Islamic Golden Age, and who in any case disliked democracy and considered it a suboptimal system (especially Plato).

Most importantly, and fifth, it frees those of us living outside Western liberal countries to truly embrace liberal democratic values without pandering to the same countries that colonised our lands and destroyed our societies. Those Western countries are now increasingly irrelevant, and we do not do them any favours by building a democratic society guided by reason, healthy civic participation, the rule of law, and respect for society and its institutions that are ultimately accountable to us. For a country like Pakistan, liberal democratic values are exactly what is required to build a better society, as it did in Europe. Best of all, this is not because of some dead Europeans whose kids are living off wealth stolen from us. Instead, it is because great spirits, like those of Kandioronk’s, can live on in all of us.

Dr. Usman W. Chohan is the Director for Economic Affairs and National Development at the Centre for Aerospace and Security Studies (CASS). The article was first published in The Nation. He can be reached at cass.thinkers@gmail.com.