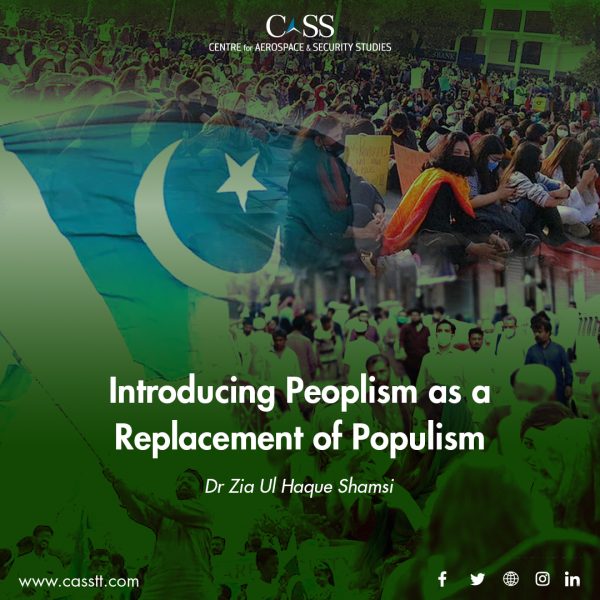 Populism, a concept developed in the 19th century, established itself as a social theory and drew strength from its ideals of representing common people against the elites. However, it ran out of steam in the debate of left and right, east and west, north and south, and the developed and developing societies. Therefore, this author believes that a newer terminology with a different outlook may be introduced to achieve meaningful results.

Populism was known to be striving to appeal to common people to rise against the elite class of the society, which appeared oblivious to their problems and disregarded the genuine issues, which may have resolved some of the recurring problems. Whereas the peoplism that is being proposed aims to make ordinary people demand their inclusion in the policy and decision-making processes of the state. Perhaps, it is time that peoplism is considered a social theory that would draw its strength from people’s desire to be heard and not only as a popular sloganeering.

The peoplism, in its proposed outlook, would be far more appealing than a mere public opinion that has no place in the developing world. The people in the developed world may be more fortunate that their opinion is given due weightage and there is very little room for the ruling elite to ignore public opinion. However, this is not the case in most developing states and even the elections in some countries are engineered in a manner that people’s voice is rendered ineffective.

Let’s first catch up on Election Engineering, because Pakistan also suffers from this perennial disease and even the winners also complain of large-scale irregularities in the election processes and the outcome. The term “electoral engineering,” describes “the development and implementation of constitutional and legal provisions for electoral systems frameworks that are targeted at achieving specific societal goals.”

However, the election process is often looked at with suspicion even in the most advanced and developed democracies due to emerging terminologies like “digital gerrymandering” etc. “A gerrymander is the manipulation of voting district boundaries for partisan effect.” The terminology is attributed to Elbridge Gerry, who contested for the re-election of the Massachusetts governor’s office in the early 1800s, however, “the tactic it describes dates back at least as far as 1701.” Although Gerry lost the elections, “its potential for manipulating election results was immediately recognized by the electoral-victory-at-any-cost partisans as a boon to oligarchy, and it’s been used to great effect ever since.” Not too far back in the history of US Presidential elections in 2016, “we saw how foreign powers could affect US elections. Now the nation is scrambling to secure the system amid a pandemic.” The outcome of the 2020 Presidential elections was even more dreadful where the sitting President did not accept the results or even the court decisions on several petitions that he and his party had filed.

The theory of peoplism cannot coexist with election engineering, because the people’s choice and voice, are snubbed by coercion and manipulation. The process gets more strained because the people who think that their choice and voice were not respected, do not participate in the policy and decision-making processes, and hence remain disillusioned with the government. On the other hand, the government, elected or selected, does not take people-friendly policy decisions and ignores their demands for the sake of remaining in power by expanding all available means.

The ruling elites’ outright rejection of people’s will has had extremely adverse outcomes in various developing states in the last decade. Beginning in North Africa, the commonly referred to as Arab Spring, led to the ousters of many sitting governments and massive destruction of state infrastructure and fatalities, which could all be attributed to lack of peoplism in those states. The new Sri Lankan government is still grappling with the aftershocks of economic-driven political chaos, mainly due to political elites’ apathy towards peoples’ will.

Therefore, this author is of the view that with the increased awareness of the people due to the emergence of social media as a medium of hi-speed information, it would be prudent for the ruling elite not to ignore people’s will. For the people, it is suggested that they voice their concerns in a peaceful and organised manner that would give strength to peoplism instead of populism which has disappeared in the debate of developing and the developed world. The peoplism can survive if it remains peaceful, meaningful, result-oriented, firm and logical in its demands, and under a strong, competent, resolute, and dependable leadership.

Dr Zia Ul Haque Shamsi is the author of ‘Nuclear Deterrence and Conflict Management Between India and Pakistan’ and ‘South Asia Needs Hybrid Peace.’ He is presently working as Director (Peace and Conflict Studies) at the Centre for Aerospace & Security Studies (CASS), Islamabad, Pakistan. The article was first published in Daily Times. He can be reached at cass.thinkers@gmail.com