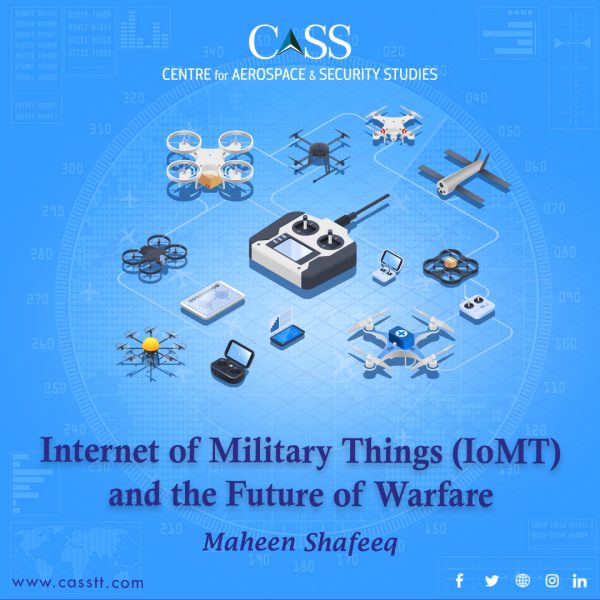 The Internet of Military Things (IoMT) is a class of heterogeneously connected devices employed for future warfare. It has wide applications in advanced combat operations and intelligence-oriented warfare. For example, it allows real-time connection among devices, such as between unmanned vehicles and a central command station. Likewise, it would enable a broader warfighting concept interpreted as Joint All Domain Command and Control (JADC2) by the United States (US) military. JADC2 is based on a similar network of sensors that connect all battlefield devices.

A majority of highly advanced military units have integrated IoMT into their battlefield operations to enhance their surveillance and response strategies. This concept offers multiple strategic options to militaries. For example, deployment of multiple sensors of IoMT across various domains (air, land, sea, space and cyber) can support data to acquire comprehensive situational awareness and understand the information ecosystem of the battlefield. This will ultimately speed up the Observe, Orient, Decide, Act (OODA) loop of decision-making and help in prompt and accurate planning and execution in future warfare.

IoMT can connect not only battlefield devices but also military troops through wearable devices. Under challenging terrains such as mountains, jungle or deserted terrains, wearable devices such as a jacket or a wristband can sense and track troops’ health status, weapon state, atmospheric conditions, relative locations and communicate all such information to the central command. The central command can analyse the tactical data of the soldiers to make decisions, based on incoming real-time information. It is expected that with the advancement of neural networks, wearable devices will also be able to evaluate the physical, psychological and emotional state of Air Force pilot. It is also anticipated that automated battleground devices, such as mechanised snipers would be equipped with IoMT. Such a sniper would have two units, a firing unit and a control unit. A webcam and a sensor would detect movement while the control unit would order fire.

Cloud computing would be essential for the storage of data gathered from multiple sensors of IoMT. A 5G connection would, therefore, be vital for data transfer through high bandwidth and low latency. Likewise, Artificial Intelligence (AI) and data analytics would be crucial for data processing.

The US and China have actively invested in IoMT. The US military has developed an integrated warfighting network that converges and combines all the data from IoMT sensors, radars, and satellites. This data is filtered to pinpoint critical data for successful missions. IoMT solutions have also been used to integrate the Army’s ballistic missile defence system and classified communication networks into one central hub to interact with and engage threats. US defence contractors such as Lockheed Martin, L3Harris and Northrop Grumman have worked on various elements of this integrated battle network.

Similarly, China has also shown great interest in IoMT. The model China has adopted to develop IoMT includes a high level of collaboration between academic and government research organisations, the private sector and defence industrial complexes. Like the US, China has also developed a strategic outline for integrated warfare. The Chinese National Defence White Paper (NDWP 2019) characterised future warfare as ‘Intelligent Warfare.’ A round of cutting-edge IoT technologies would drive the development of an intelligent military and ultimately create a modern military force for the future. This process is expected to be completed by 2035.

The IoT ecosystem in Pakistan is nascent as the country lacks the basic infrastructure to produce IoT devices on a large scale. Presently, small start-ups have been engaged in building IoT devices through outsourcing, mainly to China. These start-ups have developed wearable medical devices, smart home appliances, trackers for electric consumption­, etc. IoMT devices require a large upfront budget; however, these applications offer long-term benefits. As Pakistan is heavily inclined towards developing its capacity in emerging technologies, IoMT should not be neglected as it could be a force multiplier that facilitates the network of communication and data transmission. Coupled with advancements in the telecom industry and 5G, IoMT can deliver effective and precise military capabilities that would help in tackling any future threat environment.

Maheen Shafeeq is a Research Assistant at the Centre for Aerospace & Security Studies (CASS), Islamabad, Pakistan. The article was first was published in Modern Diplomacy. She can be reached cass.thinkers@casstt.com.