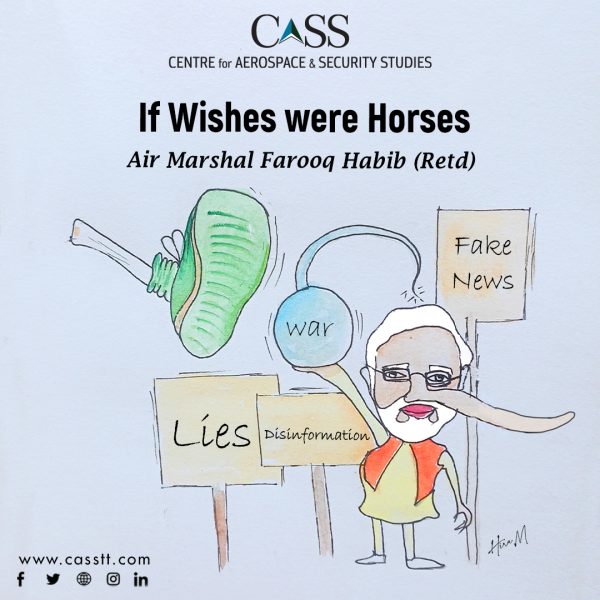 The 1966 blockbuster ‘The Good, the Bad and the Ugly’ is regarded as one of the most iconic Western movie of all times. Apart from Clint Eastwood’s ‘worn out poncho’, the movie’s soundtrack received an overwhelming response. The movie is also credited with some memorable lines. One striking quote relates to a famous scene when Eli Wallach (Tuco), enjoying a bubble bath is challenged by a scarred face gunman, who indulges in a long diatribe before positioning himself to take a shot. Eli, cool and calculating, in the meantime, fires a flurry of shots from his invisible gun submersed in the suds. Seconds later, standing beside the fallen body of the gunman, Eli utters the famous line ‘When you have to shoot, shoot, don’t talk!’

There is a lesson or two in this famous quote for the Indian Defence Minister and his coterie, especially after his latest foul-mouthed statement on Gilgit-Baltistan (GB) ‘confidence is silent, insecurities are loud’. Time and again, Indian leaders, both civilian and military, have succumbed to the habit of indulging in lengthy coercive rhetoric against Pakistan for domestic mileage. Time and again, their words have brought them more embarrassment and even humiliation, shortly afterwards. Recollecting a few instances, in this regard, is in order.

Soon after their nuclear tests at Pokhran in 1998, the Indian media went into a frenzy with provocative commentary, including threats of nuclear war against Pakistan hurled by their leadership. However, Pakistan’s befitting response of testing its own device two weeks later poured cold water on the media’s rage. The loud voice of Indian leaders trailed off as the reality of a strategic balance in South Asia sunk in. Since then, the Indians have been more circumspect, and prudently so, with regards to nuclear talk.

A similar litany of coercive threats was launched by the senior Indian leadership after a roadside ambush in Pulwama district on 14 February 2019 in which 40 security personnel were killed. 12 days later, with the media drumbeating as usual, and the leaders carried away by the false (and dangerous) notion of space for a conflict, the Indian Air Force (IAF) was ordered to conduct an air strike inside Pakistani territory. The operation ended up as a complete fiasco but in reverence to the well-established tradition of unfounded rhetoric, a host of implausible stories, including the death of 300 alleged terrorists, were fabricated by Indian leaders and media. The false narrative, though, could not withstand the revealing satellite images and international investigative reports. A counterstrike by the Pakistan Air Force (PAF) the very next day resulted in downing of two IAF aircraft and brought further international humiliation for India. Yet, the important lesson of avoiding reckless and impulsive talk was not learnt.

The pervasive practice of misleading statements by Indian leaders was also evident in its recent conflict with China in Ladakh region. In an all-party meeting on 19 June 2020, Prime Minister Modi attempted to portray an incorrect picture of the ground situation by stating that ‘none was inside Indian territory, and no post was occupied by anyone’. Only hours later, China laid its claim to the entire Galwan Valley. Manmohan Singh, former Prime Minister and Congress leader, castigated Modi on his statement saying that disinformation was no substitute for diplomacy or decisive leadership, and that truth cannot be suppressed by spouting false statements.

In continuance to such typical Indian bombastic proclamations, the Air Chief and Defence Minister also contributed their bit to this tradition. Earlier in April this year, Air Chief Marshal Vivek Ram Chaudhari stressed upon the IAF to remain prepared for a short and intense war, a reference yet again, to the possibility of limited war with Pakistan. While in late October, Rajnath Singh, well-known for his irresponsible outbursts, disclosed the desire to annex Gilgit-Baltistan during a speech at a ceremony in Indian Occupied Kashmir.

Ironically, both gentlemen, are perhaps two of the most informed persons about the harsh realities of the current level of preparedness of the Indian Armed Forces, as well as the dire consequences of even very limited action in the nuclear environment. Mr Singh, who in his capacity as Defence Minister must be aware of the socioeconomic indicators of India which have plummeted further in the aftermath of the Pandemic, despite some remarkable recovery in the last 15 years. As per Pew estimates, millions in India have slipped below the poverty line. The global Multidimensional Poverty Index (MPI) reported that in 2020, the highest global poverty increase happened in India. Even though India was declared ‘Open Defecation Free’ (ODF) by the government in October 2019, a report of the Joint Monitoring Program for Water Supply, Sanitation and Hygiene by the World Health Organization and UNICEF released in July this year observed that around 15% of the country’s total population was defecating in the open. Given the Indian population of 1.39 billion in 2021, that makes a figure of over 200 million people defecating in the open. It would indeed serve India well, if the Mr Rajnath could consider this figure before bringing up his desire for war. It would be even better if Indian leaders take a lesson in learning the virtues of silence.

Air Marshal Farooq Habib (Retd) is presently working as Senior Director at the Centre for Aerospace & Security Studies (CASS), Islamabad, Pakistan. The article was first published in The Nation. He can be contacted at: dir.nationalsec@casstt.com.