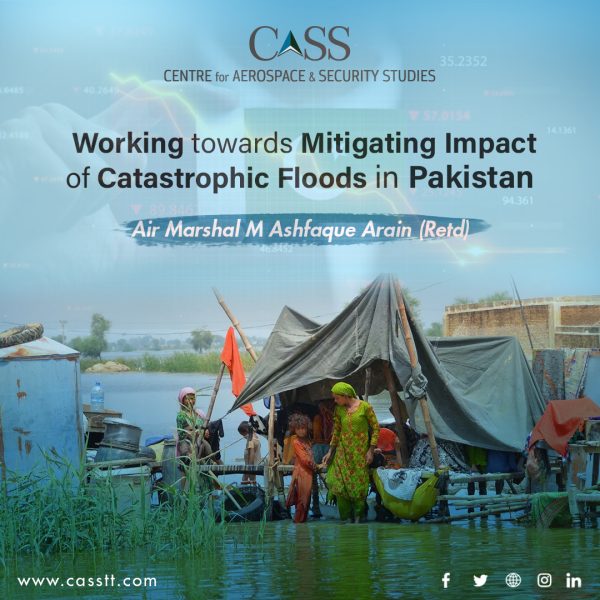 The timing of the most horrible floods in Pakistan’s history could not have been worse. While the country was still recovering from the economic conditions created by COVID-19, the Russia-Ukraine war resulted in global energy and food crises. If that was not enough, change of government in April this year led to unprecedented political crisis, which is continuing without any sign of settlement. Fake news and unverified information on social media are not only fuelling emotions but is also leading to divisions amongst the masses.

Out of 150 districts, the ongoing floods have severely affected 110 districts, with loss of more than 1100 precious lives, over 1.2 million cattle and destruction of over 7.5 million acres of standing crops such as cotton, rice, and vegetables etc. Houses, schools, and basic health units have been destroyed or inundated. Roads, bridges, railway tracks and telecommunication systems have sustained massive damage making immediate relief work in the affected areas difficult. These difficulties will further endanger health and safety of the stranded people as waterborne disease, malaria and hunger take their toll on the people and their livestock.

While the floods have destroyed existing cotton, rice crops and vegetables in the affected areas, wheat stored in the godowns (storage areas) has also been ruined. In addition to creating food shortage and price hike this year, the inability of sowing wheat in the flood affected areas in October / November, will create food shortages next year as well. This will affect the poor segments of society the most.

Despite knowing Pakistan was in the list of ten most affected countries, successive governments with the exception of ‘Billion Tree Tsunami’ failed to take steps to mitigate any disastrous situation arising out of climate change. The government failed to take notice of and act on the warning of extraordinary monsoon rains issued as early as April and Pakistan Meteorological Department’s warning regarding flood situation arising out of extraordinary rains in May this year. The Federal government remained engaged in political engineering / political crises management and did not focus on the oncoming floods. All federal and provincial departments also failed to even initiate any worthwhile actions. Unfortunately, no one took any steps even when deep into the crisis as late as mid-July, except NGOs. Had there been timely action by the government and related departments, loss of life and livestock would have been minimised, as was witnessed in some areas where the administration was proactive.

Unfortunately, even during this catastrophe, political rivalry continues at unprecedented scale. Court cases against opponents, denying space on electronic media for fund collection campaign, illegal instructions to banks, fake news and maligning opponents seem more important than supporting the ill-fated people of the flood devastated areas. These attempts are only increasing polarisation in society and fuelling anger in the masses, amply evident from videos circulating on social media, suggesting increasingly hostile attitude of citizens towards the political leadership. Many political leaders have faced embarrassing situations in their own constituencies.

There is a need to understand that the situation in the country is unprecedented and special in many ways. Special circumstances necessitate special decisions. While millions are suffering from the calamity, the leadership needs to rise above personal interests and egos to jointly support the masses or at least, avoid creating hurdles for others. The leadership, instead of wasting time on mainstream media for maligning others, should look after their respective ministries’ functioning. Both the mainstream media as well as media cells of political parties should also play their role in motivating people to support their brethren in need, rather than creating splits through building false narratives.

The government needs to initiate short- and long-term measures. The short-term measures should be aimed at provision of food, medicine, and shelter to the people of the flood affected areas. While planning should be started right away; after the flood water recedes, reconstruction of houses, schools, hospitals, and communication infrastructure should be started to rehabilitate 33 million people. Steps must be taken to ensure that the entire process remains transparent. While urgent steps are required to meet the wheat requirements, the government also needs to predict and plan to acquire wheat for the coming year as well. Since food and other supplies need to be transported to different areas, fuel prices must be adjusted to reduce transportation costs. Additionally, the in kind coming from the friendly countries must reach the affected and deserving people. High profile visits to the flood affected areas also need to be curtailed and those helicopters and transports should be employed for flood relief work. This will also help local administration to focus on the people instead of VVIP protocols.

The long-term measures should look into clearing rivers and other water channels of any encroachments, strengthening of protective bunds, construction of dams for water storage and extensive tree plantation. Tree cutting should be banned and violations should be punished severely. Any financial assistance received from the friendly countries must be judiciously used to meet both, the short-term as well as long-term requirements.

Leadership at all levels needs to understand changing ground reality and come out of 20th Century mindset. Today, the public has become much more aware, thus, is less likely to be manipulated and hoodwinked. Social media has become an effective tool to distinguish facts from fiction. Narrative building or image improvement through photo sessions or media campaign etc. will not only prove counterproductive but will also further damage the reputation of those who rely on such tactics. If the leadership continues to use such tactics in the 21st Century, it will only invite the wrath of the people.

Air Marshal M Ashfaque Arain (Retd) is Advisor to Chief of the Air Staff on CASS Affairs and is also Director of the Emerging Technologies programme at the Centre for Aerospace & Security Studies (CASS), Islamabad, Pakistan. He can be contacted at: advtocas@casstt.com