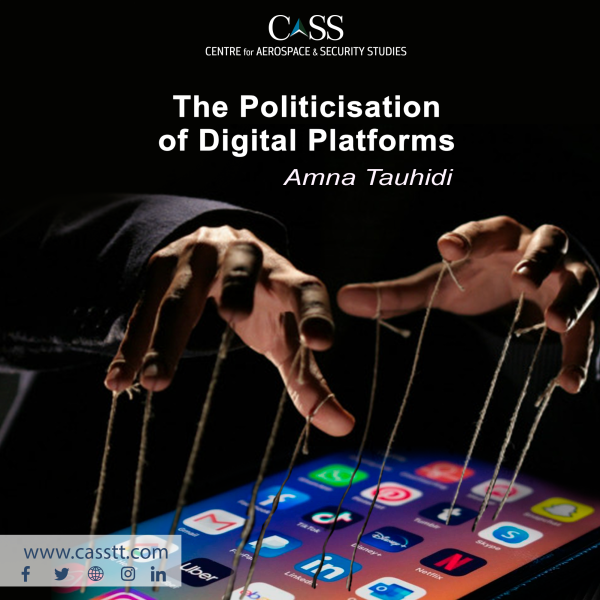 Every time I log into my social media accounts, my newsfeed is filled with relentless political debates, rhetoric, and hatred, all thank to the digital revolution. As a result of this revolution, media consumption now takes place in the palm of our hands. There is no doubt that digital platforms, specifically social media, have led to greater connectivity and projection of one’s thoughts and views, but at the same time, these platforms have also become a breeding ground for polarisation and information pollution.

Digital media platforms like Twitter, Facebook, Tik Tok, YouTube, etc. allow users to post without any restriction. This has facilitated the increase of hate, bullying, character assault, derogatory remarks, racism, and provided anti-state elements opportunity to propagate their narratives openly. Political parties and politicians also use these platforms to malign their opponents by posting objectionable and indecent content online to hurt them politically.

In this regard, several research studies in the United Kingdom and United States consider social media highly effective in affecting political discourse and spreading political sectarianism.  An article published in the journal ‘Trends in Cognitive Sciences’ sees social media as a key facilitator of polarisation. Similarly, it has become an important tool in political campaigns to connect with voters, especially the youth. A RUSI analyst pointed out that 39% of the adults used social media purely to discuss politics and cited Rafael Behr who noted that in the US, Twitter enabled ‘opinion silos, deep but narrow socially homogeneous echo chambers, held together by similar political assumptions.’

In Pakistan, the use of social media for political communication has grown over the last few years. For instance, in 2016, Panama Leaks was the most debatable and hot topic both on traditional and social media. The propagation and dissemination of news on social media influenced the perception of the public, especially youth. Pakistan has 64 percent of the population below 30 years of age. These stats are attractive for any political party to harness the support of young people of the country. In the 2018 elections, social media was used as a primary tool in political campaigns. Three common social media trends were seen during the 2018 election campaign i.e., hate speech, traducement, and promoting violence against each other on social media for gaining an edge over a political rival.

This political polarisation is affecting Pakistan’s societal harmony to a dangerous level as it is threatening its national integration where forged pictures, videos, and documents become facts without investigation and are used by the parties to amplify their point of view. Information pollution and misinformation have enabled political parties to spread false narratives against each other. Instead of criticising party policies, politicians and their supporters make personal attacks on the opponents, thus further polarising society. Similarly, blame games to gain public support up to the extent where religion and personal affairs are used to manipulate the sentiments of the public has become a norm. However, while such tactics have remained part of politics, the real test lies in limiting it while upholding civility and democratic norms.

Hence, to counter political polarisation and politicisation of digital platforms, a consensus among all political actors is required to discourage hate speech and below the belt attacks on opponents on social media. Moreover, there is a strong need of working on regulating social media platforms in the vital national interest. Otherwise, in the absence of accountability and regulatory mechanisms, national integration, would increasingly be prone to disharmony and disarray.

Amna Tauhidi is a researcher at the Centre for Aerospace & Security Studies (CASS), Islamabad, Pakistan. She can be reached at cass.thinkers@gmail.com